A new and relatively simple method for discovering the date when centuries-old art prints and books were produced has been developed at Penn State. The method could reveal long-sought information about thousands of undated works printed on hand-operated presses prior to the development of modern printing methods in the mid-19th century, including works by Rembrandt and Shakespeare. "The discovery that the wood blocks and metal plates used for printmaking deteriorate at a clock-like rate means that we can now use the prints as a "print clock" for determining the date a work was printed," says Blair Hedges, professor of biology at Penn State and author of the paper describing the research, which will be published in the scientific journal Proceedings of the Royal Society A: Mathematical, Physical, and Engineering Sciences.

"This method of dating books using predictable woodcut and engraving degeneration constitutes one of those rare 'A Ha!' moments in bibliographical studies," comments David L. Gants, an expert on the physical characteristics of early books at the University of New Brunswick in Canada, who did not participate in the research. "If the method works across woodcuts from different periods in the hand-press period, then it will -- in one stroke -- render antiquated the existing strategies for dating books."

Hedges, a world-renowned biologist whose hobby involves Renaissance prints and maps, developed his "print clock" method by first measuring time-related changes in 2,674 Renaissance works. He found that the number of breaks in the lines of images printed from woodblock carvings increased over time, while the image intensity became more pale in copperplate prints. "Because woodblocks and copperplates were expensive to replace, they commonly were reused for decades to produce multiple editions of a book or print," Hedges says. His methods include taking digital photographs of the prints, which he analyzes with standard statistical methods and with widely used image-analysis software. Working with black-and-white pixels, the software can detect and count breaks in the lines of woodblock prints and can measure fading of the etched and engraved lines of copperplate prints.

The analyses reinforced the visible evidence that prints made from the same woodblock or copperplate were qualitatively different in later editions. Surprisingly, the analyses also revealed that the changes were usually clock-like on average, and therefore could be useful for calculating the printing dates of other art and books that currently are undated.

The new "print clock" technique is similar to the molecular-clock technique for timing the rate of genetic mutations, which Hedges uses as a fundamental tool for dating genetic material in much of his biological research. Both methods rely on large numbers of events that do not each occur at regular intervals but that, as a group, can be used to gauge the average rate of those events over time. "Genetic mutations -- like the deterioration of a printer's wood blocks and copperplates -- occur sporadically at random intervals, but if you have enough of them, you can get an average rate that is quite useful for dating these very different kinds of materials," Hedges explains. "It is a simple method to use for dating early prints and it doesn't hurt the prints -- anybody can go to a library, take pictures of the prints made from wood blocks or copper plates, and analyze the changes over time."

Hedges' analyses also show that changes in print quality were caused by aging of the wood and copper alone, not by the wear and tear of the printing process itself or the number of times an impression was made with a particular block or plate. "Aging of the wood creates breaks in the relief of a carved woodblock, causing line breaks on the resulting print" Hedges discovered. "For copperplates, the image fading I measured is the result of the thinning of the etched and engraved lines caused by the erosion of the copper surface, which results from the steady corrosive effects of acid in the atmosphere plus the periodic removal of the accumulated corrosion by scouring and polishing of the plates prior to each print run." His analyses indicate that the rate of this deterioration of copper plates is 1 to 2 micrometers per year, which agrees surprisingly well with known rates for the atmospheric corrosion of copper.

In addition to image analysis and conventional statistics, the method also requires at least two images with known print dates made with the same woodblock or copperplate that can be used to calibrate the print clock. Hedges' woodblock studies involved four editions of Bordone's Isolario, an atlas containing maps of islands. The print date was known for three of the editions, published in 1528, 1534, and 1547, but the age of the undated book has been debated for nearly 200 years, with estimates ranging from 1537 to 1570. "This study used two independent print clocks and analyses of 23 copies of the book, each containing 112 different prints, for a total of 2,576 woodblock prints," Hedges explains. "The resulting estimate for the print date of the undated Isolario is mid-February 1565, plus or minus 1.3 years, making it clearly the fourth or last edition." Because the dated editions were unevenly spaced in time, they helped to determine that the deterioration in print quality is related to the relatively constant age-related deterioration of the woodblocks rather than to events during each press run.

Hedges' copperplate studies focused on two books containing early maps of Jamaica, Cuba, and Hispaniola. One of the books, by Porcacchi, was printed in six editions over five decades beginning in 1572; the other, by Magini, was printed in three editions beginning in 1596. All editions of both books were printed with the original copperplates and were unevenly spaced in time, again providing a means of confirming that changes in print quality resulted from the passage of time rather than from the number of prints made with the plates.

"The assumption in published papers in this field was that prints from later editions of the same copperplate are paler because the enormous pressures in the printing process were flattening the copperplate, but my laboratory studies proved that this is not the case," Hedges says. "My measurements of copperplate prints from different editions showed that the plates used to make the prints did not become flatter with time." Hedges found clues to the cause in printer's manuals from the 1600s, which instruct printers to scour and polish the copperplate to remove corrosion before each print run.

"Blair Hedges' imaginative application of theories and technology from the fields of genetics and materials science to the realm of scholarship in the history of the book is an example of cross-disciplinary research at its best," comments John Buchtel, curator of rare books at Johns Hopkins University. "A great benefit of placing his investigations within the discourse of the scientific, rather than just that of the bibliographical, community is that Dr Hedges' postulates, inferences, and methods may undergo the same rigorous confirmation process to which any other hypothesis would be subjected. What impresses me most about his research is his insistence on an abundance of carefully observed evidence and an openness to the possibility of alternate explanatory models."

Hedges tested his new print clock by dating the four editions of the woodblock-printed book, Isolario, in two different ways. He first determined the print date for each edition by comparing the art prints contained in each edition to those in the other editions. Then, instead of comparing the art prints themselves, he compared the printer's logo, known as a printer's mark, which is a small image that print firms imprinted on the first page of all of their books, using the same woodblock or copperplate throughout the decades-long life of the company. "I was amazed that these two independent methods of dating gave me exactly the same 1565 date," Hedges says. "This means that the print clock can be used to discover the print date for a single book that has been printed only once -- or a book for which there is only one surviving copy -- by comparing its printer's mark to the printer's mark on completely different books printed by the same printer, as long as the print date for those other books is known."

In addition, Hedges used his print-clock technique to calculate the day on which there were no cracks in the wood, revealing the date when the artist finished carving the woodblock. "This estimate of the date the woodblock was carved seemed odd because it was ten years before the date of the first print, but it turned out that the carving date agreed with the historical records, which place the cartography in that earlier decade," Hedges says.

"I think this print-clock method is going to be useful, and I am anxious to try it out on more dating mysteries, including undated printings of two of Shakespeare's plays from the early 1600s -- Hamlet and Romeo and Juliet -- and also Rembrandt's prints, many of which are undated." Because many materials degrade over time, the method also could be useful in other fields of research.

This research was funded independently by the researcher, Blair Hedges.

High-resolution images associated with this story are on the web at http://www.science.psu.edu/alert/Hedges6-2006.htm, which is the URL where captions and the press release will be posted after the embargo lifts. 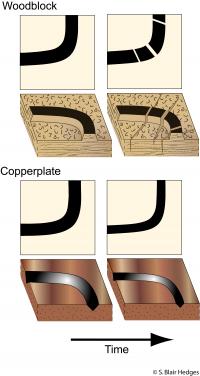 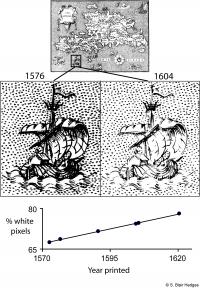