In Alzheimer's disease, a protein (peptide) forms clumps in the brain and causes sufferers to lose their memory. In a recently published article, a research group at Uppsala University described a new treatment method that increases the body's own degradation of the building blocks that lead to these protein clumps.

In Alzheimer's disease, the peptide amyloid-beta begins to form clumps in the brain. This process is called aggregation and the clumps so created are called aggregates. The treatment methods for Alzheimer's disease that are currently in clinical trials are attempts to bind to these disease-causing aggregates. But they are unable to bind to the smallest aggregates, which many now believe are the most toxic to neurons.

The treatment method developed in the new Uppsala research study using mice degrades the building blocks from which these aggregates form before they have a chance to aggregate. This treatment method therefore reduces the formation of all types of aggregates.

It has long been known that the peptide somatostatin, which was used by the researchers in the Uppsala group, can activate the body's own degradation of amyloid-beta, which is the peptide that forms the aggregates. However, it has not been possible to use somatostatin as a drug in the past because it has a very short half-life in the blood of only a few minutes, and does not cross the blood-brain barrier into the brain where the aggregates are formed.

In the study, the researchers saw the greatest effect in hippocampus, the part of the brain that forms memories and the first part to be affected by Alzheimer's disease.

"The fact that we have seen that the effect is most evident in the hippocampus in particular is very good. Our hope is that this method will be able to act in a very targeted way and have few side effects, which have been a problem in other studies," says Greta Hultqvist, assistant professor at the Department of Pharmaceutical Biosciences, who led the research study.

The study was conducted in mice, but the researchers believe that somatostatin would have the same effect in humans and that this type of treatment could be more effective than those trialled so far.

FACTS IN BRIEF: Amyloid-beta and aggregates in Alzheimer's disease

Alzheimer's disease is caused by the peptide amyloid-beta clumping in the brain. This clumping is called aggregation. Amyloid-beta not in aggregated form is present in all humans and does not cause disease, but when it starts to aggregate, that is when it becomes toxic. Initially, these aggregates are so small that they cannot be seen with a microscope. When they are this small, they can move about quite unhindered in the brain and damage neurons. If enough neurons die, you start finding it difficult to remember things.

The aggregates continue to grow and eventually become so large that you can see them with the naked eye. This is called plaque. In people who have died from Alzheimer's disease, plaque is present in much of the brain. In the past, it was thought that it was these plaques that were the villain, but now most researchers believe that they do not do much damage because they are large and immobile. Rather, it's the tiny aggregates that are the most dangerous. Even these aggregates vary greatly in size and the smallest ones have been very difficult to target with various treatment methods. 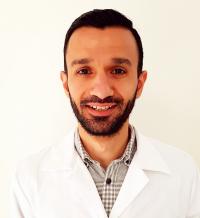