(Broadcast-quality video and infographics available with this story)

Compared with 2014, Internet safety rose from the eighth to the fourth biggest problem, ahead of school violence and smoking, in the 2015 annual survey of top children's health concerns conducted by the C.S. Mott Children's Hospital National Poll on Children's Health. Sexting saw the biggest jump, now the sixth top-ranked issue, up from thirteenth.

Childhood obesity, bullying, and drug abuse remained the top three child health concerns for a second year in a row, while child abuse and neglect ranked fifth. Smoking and tobacco use, usually rated near the top of the list, dropped from the fourth top concern to the seventh - which may reflect the decline in smoking and tobacco use by youth in recent years.

"The major health issues that people are most worried about for children across the country reflect the health initiatives providers, communities and policy makers should be focused on," says Matthew M. Davis, M.D., M.A.P.P., director of the National Poll on Children's Health and professor of pediatrics and internal medicine in the Child Health Evaluation and Research Unit at the U-M Medical School.

"The increasing level of concern about Internet safety and sexting that are now ranked even higher than smoking as major childhood health issues really dominates the story this year," adds Davis, who is also with the U-M School of Public Health, Gerald R. Ford School of Public Policy, and deputy director for U-M's Institute for Healthcare Policy and Innovation. "We found that while the public may find benefits to today's shifting media environment, whether through cell phones or other technology, many also recognize risks that may make young people vulnerable."

Expanding use of smart phones and other technology potentially exposes children and teens to the danger of predators and other harms like cyber-bullying. Sexting (sending and receiving sexually suggestive text messages and photos) has also led to cases of teens around the country suffering from low self-esteem and even committing suicide following photos being widely shared among peers.

"We found that adults from different communities across the U.S. see the challenges of child health differently," Davis says. "It's important to understand the priorities of different communities we are trying to reach as we work to safeguard children's health and help them live the healthiest lives they can."

"Since we began tracking how the public rates child health problems nearly a decade ago, we have found persistent and consistent concern for child abuse and neglect," Davis says. "This is an area we must continue to focus on in medical care, in our public health efforts and also in our health policy making."

Data Source: This report presents findings from a nationally representative household survey conducted exclusively by GfK Custom Research, LLC (GfK), for C.S. Mott Children's Hospital via a method used in many published studies. The survey was administered in May 2015 to a randomly selected, stratified group of adults age 18 (n =1,982) from GfK's web-enabled KnowledgePanel® that closely resembles the U.S. population. The sample was subsequently weighted to reflect population figures from the Census Bureau. The survey completion rate was 60% among parent panel members contacted to participate. The margin of error is ± 3 to 4 percentage points. 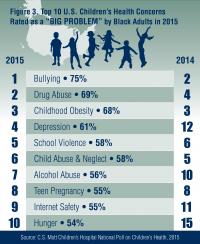