Bursts of intense global warming that have lasted tens of thousands of years have taken place more frequently throughout history than previously believe, according to evidence gathered by a team led by Scripps Institution of Oceanography, UC San Diego researchers.

Richard Norris, a professor of geology at Scripps who co-authored the report, said that releases of carbon dioxide sequestered in the deep oceans were the most likely trigger of these ancient "hyperthermal" events. Most of the events raised average global temperatures between 2° and 3° Celsius (3.6 and 5.4° F), an amount comparable to current conservative estimates of how much temperatures are expected to rise in coming decades as a consequence of anthropogenic global warming. Most hyperthermals lasted about 40,000 years before temperatures returned to normal.

The study appears in the March 17 issue of the journal Nature.

"These hyperthermals seem not to have been rare events," Norris said, "hence there are lots of ancient examples of global warming on a scale broadly like the expected future warming. We can use these events to examine the impact of global change on marine ecosystems, climate and ocean circulation."

The hyperthermals took place roughly every 400,000 years during a warm period of Earth history that prevailed some 50 million years ago. The strongest of them coincided with an event known as the Paleocene-Eocene Thermal Maximum, the transition between two geologic epochs in which global temperatures rose between 4° and 7° C (7.2° and 12.6° F) and needed 200,000 years to return to historical norms. The events stopped taking place around 40 million years ago, when the planet entered a cooling phase. No warming events of the magnitude of these hyperthermals have been detected in the geological record since then.

Phil Sexton, a former student of Norris' now at the Open University in the United Kingdom, led the analysis of sediment cores collected off the South American coast. In the cores, evidence of the warm periods presented itself in bands of gray sediment layered within otherwise pale greenish mud. The gray sediment contained increased amounts of clay left after the calcareous shells of microscopic organisms were dissolved on the sea floor. These clay-rich intervals are consistent with ocean acidification episodes that would have been triggered by large-scale releases of carbon dioxide. Large influxes of carbon dioxide change the chemistry of seawater by producing greater amounts of carbonic acid in the oceans.

Norris noted that the hyperthermals provide historical perspective on what Earth will experience as it continues to warm from widespread use of fossil fuels, which has increased carbon dioxide concentrations in the atmosphere nearly 50 percent since the beginning of the Industrial Revolution. Hyperthermals can help scientists produce a range of estimates for how long it will take for temperatures to fully revert to historical norms depending on how much warming human activities cause.

"In 100 to 300 years, we could produce a signal on Earth that takes tens of thousands of years to equilibrate, judging from the geologic record," he said.

The scientists hope to better understand how fast the conditions that set off hyperthermals developed. Norris said that 50 million year old sediments in the North Sea are finely layered enough for scientists to distinguish decade-to-decade or even year-to-year changes.

Co-authors of the paper include researchers from the National Oceanography Centre Southampton at the University of Southampton in England and the Center for Marine Environmental Sciences, University of Bremen, Germany.

Scripps Institution of Oceanography at University of California, San Diego, is one of the oldest, largest and most important centers for global science research and education in the world. Now in its second century of discovery, the scientific scope of the institution has grown to include biological, physical, chemical, geological, geophysical and atmospheric studies of the earth as a system. Hundreds of research programs covering a wide range of scientific areas are under way today in 65 countries. The institution has a staff of about 1,400, and annual expenditures of approximately $170 million from federal, state and private sources. Scripps operates robotic networks, and one of the largest U.S. academic fleets with four oceanographic research ships and one research platform for worldwide exploration. Learn more at scripps.ucsd.edu.

Fifty years ago, the founders of the University of California, San Diego, had one criterion for the campus: It must be distinctive. Since then, UC San Diego has achieved the extraordinary in education, research and innovation. Sixteen Nobel laureates have taught on campus; stellar faculty members have been awarded Fields Medals, Pulitzer Prizes, McArthur Fellowships and many other honors. UC San Diego—recognized as one of the top ten public universities by U.S. News & World Report and named by the Washington Monthly as number one in the nation in rankings measuring "what colleges are doing for the country"—is widely acknowledged for its local impact, national influence and global reach. UC San Diego is celebrating 50 years of visionaries, innovators and overachievers. www.50th.ucsd.edu 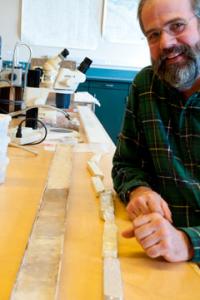