Scientists at the University of East Anglia (UEA) are tracking white storks in a bid to find out about migratory habits that disappeared more than 600 years ago.

It follows the release last month of 19 captive-bred young storks at Knepp Estate, West Sussex, as part of the White Stork Project, which aims to reintroduce them as a breeding bird in the UK. The project is led by a pioneering partnership of private landowners and nature conservation organisations.

The birds joined another four juvenile storks that fledged from two nests in the wild at Knepp this year - the first successful nests in Britain since the 15th century. Migratory birds, white storks used to be native to Britain, but the last pair recorded nested on the roof of St Giles Cathedral in Edinburgh in 1416.

For a trial in 2019, the research team at UEA and the Durrell Wildlife Conservation Trust fitted GPS trackers to eight storks, which were then released. The devices have been developed by Movetech Telemetry - a partnership between UEA, the British Trust for Ornithology and University of Porto, Portugal - and this year they were fitted to another eight young storks.

These birds are providing data that will enable the researchers to gain insights into the life and migratory choices of the reintroduced storks. A charismatic species that is happy to live alongside humans, they feed on agricultural land and nest in trees but also on chimneys and power lines. In folklore, they have been associated with the arrival of babies.

Dr Aldina Franco, associate professor in ecology at UEA, leads a research group investigating changes in the migratory behaviour of birds. She said: "The reintroduction of storks in Britain will have both ecological and cultural value and having this species restored to the UK landscape will be a fantastic achievement.

"In Britain there are no experienced migratory birds so the reintroduced birds, those migrating will have to find their migratory way and return in the spring."

European storks migrate to Southern Europe and Africa in the autumn and have two main routes - the eastern and western migratory routes - with a migratory divide in Germany.

Dr Franco added: "In the past, British storks probably used the western migratory route but storks from Poland use the eastern migratory way. In Southern Europe some populations are no longer migratory and spend the whole year near the breeding area."

Previously unpublished data from the 2019 trial reveals that many of the storks spent the winter at landfill sites in Southern Europe and Northern Africa, where they have adapted to take advantage of new food resources and gather in large numbers.

Initial data from the birds released this year indicates that migratory storks crossed to Continental Europe via Dover-Calais. Three storks are now in Spain using landfill sites, two are in France and one is still in the UK. One stork died in the UK and one in France ??is no longer transmitting, which the team is investigating using local contacts.

"There is a high level of excitement and anticipation after deploying the tracking devices, as we don't know what the birds will do or if they will survive the migration," said Dr Franco.

"In 2019 some of my colleagues were positive the UK storks would remain in the country, others thought they would migrate using the western migratory route, while I thought they follow their parents' route towards the East. In fact, we were all right, and astonished to see the diversity of strategies individuals adopted.

"The 2020 storks will encounter other individuals and follow leader birds - older animals that are more experienced - in migration. They may spend winter in a range of locations depending on the storks they encounter on the way."

The tracking devices have the potential to track the storks for several years. 'Marge', one of the best known storks from the 2019 release, is still transmitting. She spent the first winter near Rabat, Morocco, and returned to Morocco recently after a summer trip to Donana, in Southern Spain. Some of the 2019 birds remained resident in Britain.

Lucy Groves, White Stork Project Officer for the Durrell Wildlife Conservation Trust, said they are already seeing the results of changes made since last year to improve the tracking.

"Storks helped to unlock our understanding of bird migration when in 1822 a stork appeared in Germany with an African spear through its neck, proving the long journey they take each spring and autumn," she said. "Today, we have technology to give us detailed insights. Lightweight GPS tracking devices enable us to increase our understanding and knowledge of these birds' incredible journeys.

"There have been many suggestions put forward as to what our British storks would do. Would they stay here over winter? Would they migrate? Which route would they take if they left our shores?"

She added: "It has been fascinating to follow the individual migration routes taken since August 2019 and the data collected is allowing us to build up a picture of the wide range of behaviours and patterns displayed by our juveniles.

"It was amazing to watch Marge, who left the UK just two days after being released and, although she headed east to start with, she then continued on her journey south west and became our first British white stork to cross the strait of Gibraltar into Morocco. A huge success for the project.

"The combination of sightings and GPS data has shown that these juveniles are integrating with wild populations of storks, following the more experienced birds once they meet them in Europe. I am looking forward to seeing if our 2020 juveniles pick the same or different routes and if any will join Marge in Morocco?"

The juvenile storks released this year were ?offspring of? captive-bred parents at Cotswold Wildlife Park, which ?are injured or incapacitated storks rehabilitated and donated by Warsaw Zoo.

Similar reintroduction schemes, aiming to boost white stork numbers across Europe, have been implemented in the Netherlands, Belgium, Switzerland and Sweden. 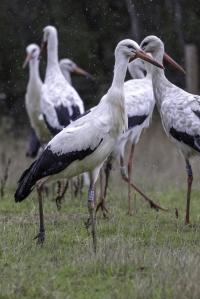