"The results will allow us to better understand how the fish communities might shift under different climate change scenarios and provide the type of environmental data to inform future decisions relating to the management and siting of protected areas," said Paula Whitfield, a research ecologist at NOAA's National Centers for Coastal Ocean Science (NCCOS) and lead author of the study.

The North Carolina reefs lie within the temperate-tropical transition zone, where historically, both temperate and tropical species live, at their respective range limits. However, water temperatures in the zone are becoming more tropical, making it an important place to detect climate changes and its impacts.

The researchers first made these discoveries during an ecological study of the marine communities on the North Carolina reefs. Findings from this earlier study showed similar shifts of climate change induced shifts in algal populations.

Researchers combined year-round bottom water temperature data with 2006-2010 fish community surveys in water depths from 15 to 150 feet off the coast of North Carolina. The study revealed that the fish community was primarily tropical in the deeper areas surveyed, from 122 to 150 feet, with a winter mean temperature of 21 °C (69.8 °F). However, many of these native tropical fishes, usually abundant in shallow, somewhat cooler reefs, tended to remain in the deeper, warmer water, suggesting that temperature is a main factor in controlling their distribution.

"Globally, fish communities are becoming more tropical as a result of warming temperatures, as fish move to follow their optimal temperature range.," said Whitfield. "Along the North Carolina coast, warming water temperatures may allow the expansion of tropical fish species, such as lionfish, into areas that were previously uninhabitable due to cold winter temperatures. The temperature thresholds collected in this study will allow us to detect and to estimate fish community changes related to water temperature."

"This kind of monitoring data set is quite rare because it combines multi-year quantitative fish density data with continuous bottom water temperature data from the same location," said Jonathan A. Hare, NOAA Fisheries research oceanographer and a co-author on the study.

Similarly, the distribution of the venomous Indo-Pacific lionfish (Pterois volitans), a species new to the Atlantic since 2000, was restricted to water depths deeper than 87 feet where the average water temperature was higher than 15.2°C (approximately 59.4 °F). As the more shallow waters warm, lionfish may expand their range, since they seem to be attracted to areas with a warmer minimum temperature. Although lionfish only arrived in North Carolina in 2000 they were the most common species observed in water depths from 122 to 150 feet in this study.

Since their first sighting off the Florida east coast, in the late 1980s, lionfish have spread throughout the western North Atlantic including the Gulf of Mexico and Caribbean. They are considered a major threat to Atlantic reefs by reducing reef fish recruitment and biomass, and have been implicated in cascading impacts such as decreased coral cover on coral reefs. To date, cold winter bottom temperatures are the only factor found to control their distribution on a large scale. 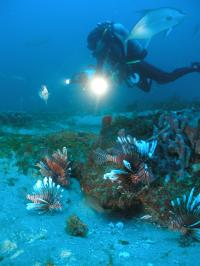