Bever, describes the extinct reptile, named Eunotosaurus africanus, as the earliest known branch of the turtle tree of life.

"Eunotosaurus is a critical link connecting modern turtles to their evolutionary past," said Bever, an assistant professor of anatomy at the NYIT College of Osteopathic Medicine. "This is the fossil for which science has been searching for more than 150 years. You can think of it as a turtle, before turtles had a shell."

While Eunotosaurus lacks the iconic turtle shell, its extremely wide ribs and distinctively circular torso are the first indications that this fossil represents an important clue in a long unsolved mystery: the origin of turtles. In a new study published in Nature, Bever and his colleagues from the Denver Museum of Nature and Science, Yale University, and the University of Chicago focus their attention on the skull of Eunotosaurus. Their findings indicated that the complex anatomy of the head houses convincing evidence of the important role played by Eunotosaurus in the deep history of turtle evolution.

"Our previous studies showed that Eunotosaurus possessed structures that likely represent the first steps in the evolution of the turtle shell" added Tyler Lyson of the Denver Museum of Science and Nature and a coauthor of the study, "but what those studies lacked was a detailed analysis of the skull."

Using high-resolution computed tomography, Bever digitally dissected the bones and internal structures of multiple Eunotosaurus skulls, all of which are housed in South African museums. He then incorporated his observations into a new analysis of the reptile tree of life. The process took the better part of four years, but according to Bever, the results were well worth the effort.

"Imaging technology gave us the opportunity to take the first look inside the skull of Eunotosaurus," said Bever, "and what we found not only illuminates the close relationship of Eunotosaurus to turtles, but also how turtles are related to other modern reptiles."

One of the study's key findings is that the skull of Eunotosaurus has a pair of openings set behind the eyes that allowed the jaw muscles to lengthen and flex during chewing. Known as the diapsid condition, this pair of openings is also found in lizards, snakes, crocodilians, and birds. The skull of modern turtles is anapsid - without openings -- with the chamber housing the jaw muscles fully enclosed by bone.

The anapsid-diapsid distinction strongly influenced the long-held notion that turtles are the remnants of an ancient reptile lineage and not closely related to modern lizards, crocodiles, and birds. The new data from Eunotosaurus rejects this hypothesis.

"If turtles are closely related to the other living reptiles then we would expect the fossil record to produce early turtle relatives with diapsid skulls," said Bever. "That expectation remained unfulfilled for a long time, but with some help from technology and a lot of hard work on our part, we can now draw the well-supported and satisfying conclusion that Eunotosaurus is the diapsid turtle that earlier studies predicted would be discovered."

In linking turtles to their diapsid ancestry, the skull of Eunotosaurus also reveals how the evidence of that ancestry became obscured during later stages of turtle evolution.

"The skull of Eunotosaurus grows in such a way that its diapsid nature is obvious in juveniles but almost completely obscured in adults. If that same growth trajectory was accelerated in subsequent generations, then the original diapsid skull of the turtle ancestor would eventually be replaced by an anapsid skull, which is what we find in modern turtles."

Although the new study represents a major step towards understanding the reptile tree of life, Bever emphasizes that it will not be the final chapter in the science of turtle origins.

"The beauty of scientific discoveries is that they tend to reveal more questions than they answer" said Bever, "and there is still much we don't know about the origin of turtles. Which of the other diapsid groups form their closest cousin? What were the ecological conditions that led to the evolution of the turtle's shell and anapsid skull? And how much of the deep history of turtle evolution can be discovered by studying the genes and developmental pathway of modern turtles?" 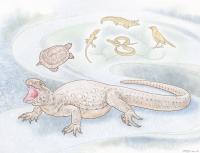