Although modern Indian and Javan rhinos have a single horn on their noses, the extinct one-horned rhino Elasmotherium was a source of the unicorn legend because it had a two meter-long horn on its forehead and lived with prehistoric humans that drew its image on cave paintings. All other elasmotheres had a weak or strong nasal horn, whereas Elasmotherium lost its ancestral nasal horn and instead developed a long frontal horn. Dr. DENG Tao (Institute of Vertebrate Paleontology and Paleoanthropology, Chinese Academy of Sciences) and his colleagues reported the first discovered skull of Sinotherium lagrelii (Figure 1) from Late Miocene red clays (~7 Ma) of the Linxia Basin, northwestern China (see Chinese Science Bulletin Vol. 58, No. 15, pages 1811-1817). The transition from a nasal horn to a frontal horn in elasmotheres has been difficult to explain because a major transformational gap exists between nasal-horned ancestors and frontal-horned descendants. This skull has connected a large posterior nasofrontal horn boss and a smaller frontal horn boss, indicating an intermediate stage to the single frontal horn of Elasmotherium. Morphological and phylogenetic analyses confirm that Sinotherium is a transitional taxon between Elasmotherium and other elasmotheres. It is positioned near the root of the giant unicorn clade and originated in a subarid steppe. A posteriorly shifted nasal horn provides more substantial support and the arched structure of the nasofrontal area is an adaptation for a huge horn. The S. lagrelii skull provides new information about the origin of the giant unicorn Elasmotherium.

Previously, S. lagrelii was only represented by cranial and mandibular fragments and isolated teeth from Late Miocene deposits in China (Baode County, Shanxi Province), Kazakhstan, and Mongolia, so its horn situation was unknown. S. lagrelii is the closest to the Pleistocene Elasmotherium in dental morphology, but the nature of its frontal horn was undetermined. This skull proves that S. lagrelii has a posteriorly displaced nasofrontal horn, derived from the configuration seen in early elasmotheres. It also has a smaller frontal horn so it differs from both Ningxiatherium (single nasal horn) and Elasmotherium (single frontal horn). It is a morphological intermediate in the nasal-to-frontal horn transition of elasmotheres that connects the evolution and biogeography of the derived elasmotheres (Figure 2).

The nasofrontal area of the skull is strongly elevated, rough, and forms a huge and hollow dome, in sharp contrast to the flat, smooth area in large nasal-horned elasmotheres, such as Iranotherium, Parelasmotherium, and Ningxiatherium. This reduces the weight of the nasal and frontal bones. The nasal horn boss is shifted posterior to reach the frontal bone and connect to the frontal horn boss. This particular horn combination has not appeared in any other extinct or extant rhinoceros. The dorsal surface of the horn bosses has many massive swellings to strengthen the adhesion of a huge nasal horn and a smaller frontal horn. The ventral surface has an ossified sagittal septum and many oblique lateral ribs that form a trussed structure of enhanced support similar to the leaf structure of the giant waterlily (Victoria). An enlarged nasal horn without other compensation would make support impossible, even with an ossified nasal septum, so the nasal horn has to shift towards the frontal bone.

The skull exhibits enormous occipital condyles, similar to other large nasal-horned elasmotheres and giant rhinos, indicating their dolichocephalic and heavy skulls. The longer skull yields great torque on the necks of elasmotheres. To retain a huge horn, elasmothere development followed two steps. First, the nasal horn shifted posteriorly to become the frontal horn and second, the dolichocephalic skull became the brachycephalic. Both changes occurred in the skull of Elasmotherium, so its occipital condyles were smaller compared to Sinotherium, and its second premolars were lost. Based on the skull, the nasal horn enlarged gradually and shifted toward the frontal bone in derived elasmotheres. Meanwhile, a smaller frontal horn developed and finally fused with the nasal horn to form a huge frontal horn. This discovery explains a distinct transverse suture on the middle of the frontal horn boss of Elasmotherium that was previously not understood. It is now determined to be a remnant of the nasal and frontal horn bosses fusing to each other.

In the previous phylogenetic analyses, the position of S. lagrelii was incompletely determined because there was no skull. Given the new discovery, the cranial characteristics of S. lagrelii place it within the monophyletic group including Sinotherium lagrelii, Elasmotherium sibericum, and E. caucasium. In this group, S. lagrelii is the most basal and connects elasmotheres possessing only a nasal horn with elasmotheres possessing only a frontal horn. This is consistent with the clade originating by the Late Miocene in China as well as Elasmotherium separating from Sinotherium in the Pliocene.

The distribution of Sinotherium in East Asia is similar to the Hipparion steppe fauna in the Late Miocene. The dolichocephalic skull, posteriorly inclined occipital surface, well-developed secondary folds, massive cement filling, and wrinkled enamel provided a means for the cheek teeth of Sinotherium to resist the abrasion of high-fiber diets and allowed it to graze on tough grasses. Sinotherium was a large rhinoceros much heavier (up to 7 tonnes) than the largest modern African white rhino (3.2.6 tonnes). If it lived by the river it would have been easy for it to get stuck in the wet mud. More likely, S. lagrelii lived in an open, usually dry environment in northern China where droughts frequently occurred (Figure 3). Early East Asian large elasmothere populations may have frequented steppe environments more often than their wet-adapted descendants in southern Russia. S. lagrelii is phylogenetically near the root of the frontal-horned elasmothere radiation. Therefore, reconstructing the species as inhabiting the steppes is an alternative to the proposal that the frontal-horned elasmotheres lived in wetter habitats near rivers.

This work was supported by the Strategic Priority Research Program of the Chinese Academy of Sciences, the Ministry of Science and Technology of China, and the National Natural Science Foundation of China.

Science China Press Co., Ltd. (SCP) is a scientific journal publishing company of the Chinese Academy of Sciences (CAS). For 50 years, SCP takes its mission to present to the world the best achievements by Chinese scientists on various fields of natural sciences researches. 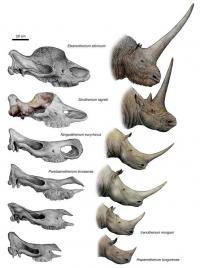