In 2017, Scot Martin, the Gordon McKay Professor of Environmental Science and Engineering at the Harvard John A. Paulson School of Engineering and Applied Sciences (SEAS), envisioned a novel drone-based chemical monitoring system to track the health of the Amazon in the face of global climate change and human-caused deforestation and burning.

The project would monitor chemical signals emitted by plants known as volatile organic compounds (VOCs), which help plants interact with organisms around them. Every species of plant emits a different VOC signature -- like a fingerprint -- which can change based on the season or if the plant is under duress from, for example, drought or flood. Monitoring and translating these signals can reveal how forest ecosystems respond to stress caused by climate change.

Traditionally, this kind of monitoring has been done from large platform towers that rise above the canopy of the forest.

"The Amazon contains thousands of small ecosystems, each with their own biodiversity and VOC signals," said Jianhuai Ye, a postdoctoral fellow at SEAS. "Yet, there are less than 10 of these towers in the entire forest and they are all built in similar ecosystems where the soil can support large structures. As you can imagine, this leads to a lot of bias in the data."

Martin, Ye and the rest of the team, which includes collaborators from Amazonas State University (UEA) and the Amazonas State Research Support Foundation (FAPEAM), thought that drones could provide more accurate data of the forest.

Their first mission demonstrated how right they were.

In the summer of 2018, after years of prototyping, the researchers used their specially-designed drones to map the chemical fingerprint of two different ecosystems in central Amazonia. What they found overturned most present-day biosphere emissions models, which assumed that nearby ecosystems had the same emissions.

"Plants and insects often communicate via chemical signaling, rather than visual or vocal signaling more common among animals," said Martin. "With our chemical sensors, we can better understand the current functioning of the forest and how it is changing with shifting regional climate, including a more frequent occurrence of fires in recent years in the central part of the Amazon."

The research team flew drones over plateau forests and slope forests. They found that concentrations of a VOC called isoprene were more than 50 percent higher in the plateau forest than in the slope forest. Using this data, they developed a model that suggested that isoprene emissions doubled to tripled among these different forest sub-types. In the absence of measurements, previous emission models assumed no difference.

"This research highlights how little we understood forest heterogeneity," said Martin. "But drone-assisted technologies can help us understand and quantify VOC emissions in different, nearby ecosystems in order to better represent them in climate and air quality model simulations."

The researchers plan to sample ecosystems in water-logged valleys and along the rivers in Fall 2019 using a boat in the middle of the river as a platform for launching and retrieving the drones. They also plan to test a three-drone fleet operated in unison.

It was supported by the Harvard Climate Change Solutions Fund, The Brazilian Federal Agency for Support and Evaluation of Graduate Education (CAPES), the Brazilian National Council for Scientific and Technological Development (CNPq), a Senior Visitor Research Grant of the Amazonas State Research Foundation (FAPEAM), the Postdoctoral Program in Environmental Chemistry of the Dreyfus Foundation, and the Division of Atmospheric and Geospace Sciences of the National Science Foundation.

A precise chemical fingerprint of the Amazon 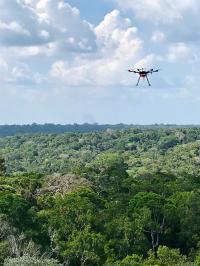 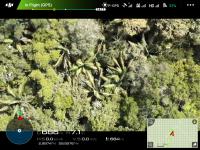 The View on the Screen of Drone Controller