Black holes are one the most fascinating objects in the Universe. At their surface, known as the 'event horizon', gravity is so strong that not even light can escape from them. Usually, black holes are quiet, silent creatures that swallow anything getting too close to them; however, when two black holes collide and merge together, they produce one of the most catastrophic events in Universe: in a fraction of a second, a highly-deformed black hole is born and releases tremendous amounts of energy as it settles to its final form. This phenomenon gives astronomers a unique chance to observe rapidly changing black holes and explore gravity in its most extreme form.

Although colliding black holes do not produce light, astronomers can observe the detected gravitational waves--ripples in the fabric of space and time--that bounce off them. Scientists speculate that, after a collision, the behaviour of the remnant black hole is key to understanding gravity and should be encoded in the emitted gravitational waves.

Graduate student and co-author Christopher Evans from the Georgia Institute of Technology (USA) says: 'We performed simulations of black-hole collisions using supercomputers and then compared the rapidly changing shape of the remnant black hole to the gravitational waves it emits. We discovered that these signals are far more rich and complex than commonly thought, allowing us to learn more about the vastly changing shape of the final black hole'.

The gravitational waves from colliding black holes are very simple signals known as 'chirps'. As the two black holes approach each other, they emit a signal of increasing frequency and amplitude that indicates the speed and radius of the orbit. According to Prof. Calderón Bustillo, 'the pitch and amplitude of the signal increases as the two black holes approach faster and faster. After the collision, the final remnant black hole emits a signal with a constant pitch and decaying amplitude--like the sound of a bell being struck'. This principle is consistent with all gravitational-wave observations so far, when studying the collision from the top.

However, the study found something completely different happens if the collision is observed from the 'equator' of the final black hole. 'When we observed black holes from their equator, we found that the final black hole emits a more complex signal, with a pitch that goes up and down a few times before it dies,' explains Prof. Calderón Bustillo. 'In other words, the black hole actually chirps several times.'

The team discovered that this is related to the shape of the final black hole, which acts like a kind of gravitational-wave lighthouse: 'When the two original, 'parent' black holes are of different sizes, the final black hole initially looks like a chestnut, with a cusp on one side and a wider, smoother back on the other,' says Bustillo. 'It turns out that the black hole emits more intense gravitational waves through its most curved regions, which are those surrounding its cusp. This is because the remnant black hole is also spinning and its cusp and back repeatedly point to all observers, producing multiple chirps.'

Co-author Prof. Pablo Laguna, former chair of the School of Physics at Georgia Tech and now Professor at University of Texas at Austin, pointed out 'while a relation between the gravitational waves and the behaviour of the final black hole has been long conjectured, our study provides the first explicit example of this kind of relation'.

The Stages of a Black Hole Merger 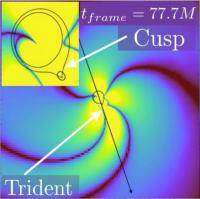