Researchers at the University of Alaska Fairbanks' Geophysical Institute are exploring the changing chemistry of the Arctic's atmosphere to help answer the question of what happens as snow and ice begin to melt.

The research, led by chemistry professor William R. Simpson, is concerned with the Arctic's reactive bromine season, which is the period of time when bromine is consuming ozone, producing bromine monoxide and oxidizing mercury.

Reactive bromine events occur during Arctic springtime, when temperatures are low and sea ice is snow-covered. As springtime transitions to summer, with temperatures climbing above freezing and snowpack melting, these events cease and atmospheric bromine quantities become low.

"Atmosphere chemistry really changes when snow melts," said Simpson. "And earlier melt is changing what is happening in the atmosphere."

While scientists studying the Arctic typically have a narrow time window to gather information, Simpson's research group used a year-round data set that included buoy-based observations in the Arctic Ocean.

Peter K. Peterson, one of Simpson's student researchers, noted a predictive application of the research: An increased understanding of bromine reactivity could help scientists figure out how "the atmospheric composition in the Arctic might respond to rapidly changing sea ice conditions."

"Monitoring the seasonal end date each year could give us an indication of climate change as well, since it correlates to temperature change," added Justine A. Burd, the student researcher who processed the data and research correlations. "Is the bromine season ending earlier each year, staying approximately the same, or getting longer?"

"Knowing how snow and ice affect the atmosphere is becoming even more important considering the changing Arctic ice pack and changing Arctic temperatures," said Simpson. "This narrow work is one part of a big, broad question: what happens when snow starts to melt?"

A paper co-authored by Burd, Peterson and Simpson that includes the group's methodology and findings has been published by the American Geophysical Union. 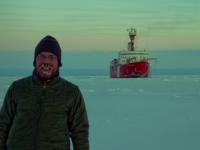