When temperatures drop, the enzyme Rubisco that fuels plant growth and yield gets sluggish. Many crops compensate by producing more Rubisco; however, scientists speculated that some crops may lack space in their leaves to boost the production of this enzyme, making them more susceptible to cold. A new study from the University of Illinois and the Massachusetts Institute of Technology refutes this theory but found these crops are far from reaching their photosynthetic potential.

"But by isolating the enzyme to just one part of the leaf, would there be enough space for the larger amount of Rubisco needed at lower temperatures?" said Stephen Long, Ikenberry Endowed University Chair of Crop Sciences and Plant Biology at the Carl R. Woese Institute for Genomic Biology at Illinois.

Published in the Journal of Experimental Botany, the study measured the volume of the Rubisco-holding chloroplasts that reside in the bundle sheaths of corn, sugarcane, as well as cold-tolerant Miscanthus. The team concluded that these C4 crops' chloroplast volumes are sufficient to hold more than enough Rubisco to conduct photosynthesis at low temperatures. Curiously, Miscanthus had the smallest chloroplasts, showing there was no connection between chloroplast volume and cold tolerance.

"Yet these plants are still not able to reach their maximal potential energy output," said lead author Charles Pignon, a postdoctoral researcher at Illinois, whose work was supported by the Edward William and Jane Marr Gutgsell endowment. "Now that we've ruled out space as a limiting factor, we need to explore what other factors are impacting the cold tolerance of these important crops."

By unlocking the key to cold tolerance, plant scientists can extend the growing region and season of these crops to boost food and bioenergy production across the globe. Next, the researchers plan to compare the cold tolerance of Miscanthus varieties to pinpoint important differences.

The open-access paper "Bundle sheath chloroplast volume can house sufficient Rubisco to avoid limiting C4 photosynthesis during chilling" published by Journal of Experimental Botany (DOI: 10.1093/jxb/ery345) is available online or by request. Co-authors also include Marjorie Lundgren and Colin Osborne from the Massachusetts Institute of Technology. 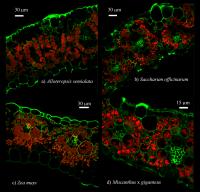