An infestation of speck-sized Varroa destructor mites can wipe out an entire colony of honey bees in 2-3 years if left untreated. Pesticides help beekeepers rid their hives of these parasitic arthropods, which feed on the blood-like liquid inside of their hosts and lay their eggs on larvae, but mite populations become resistant to the chemicals over time.

While exploring plant-based alternatives to control Varroa mites, Chinese bioagricultural and Japanese cell physiological labs saw that certain tick repellents repress mites from finding their honey bee hosts. In a paper published on July 2 in Cell Reports, they describe how the repellents activate a sensory protein (the transient receptor potential or TRP channel) found on the mites' front legs. That a single protein could influence something so important for mite survival is evidence that the protein may have helped the mites adapt as honey bee parasites in the hive environment.

"Several plant-derived tick repellents activated the TRPA1 channel in Varroa mites but had no effect on the TRPA channels in honey bees and fruit flies," said senior study author Tatsuhiko Kadowaki, an associate professor of biology at Xi'an Jiaotong-Liverpool University. "This is a good example of TRP channel evolutionary plasticity since the mite version was capable of acquiring new activation mechanisms during evolution."

TRP channels have a known role in sensation across many living things. The proteins, found along the surface of various cell types, are used to detect whether the environment is hot or cold for some organisms, while for others they are important in vision, hearing, smell, and taste. When Kadowaki's team activated TRPA1 channel activity in Varroa mites, it could repress them from entering honeycombs with bee larvae, where they reproduce.

"The Varroa TRPA1 channel is the first TRP channel characterized in Acari, which includes mites and ticks, representing the majority of external parasites of various animals and plants," Kadowaki said. "We'd like to further understand the roles of TRP channels in host-parasite interactions and the underlying molecular and cellular mechanisms of the adaptations necessary for successful parasitism."

In addition, his lab would like to explore whether natural pesticides could be developed that specifically target TRP channels.

This work was supported by the Suzhou Science and Technology Development Planning Programme (Grant#: SYN201213).

What bee-killing mites can teach us about parasite evolution 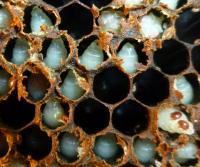