NASA's TRMM satellite continues to follow the remnants of former Tropical Cyclone Gillian as it moved from the Southern Pacific Ocean into the Southern Indian Ocean where it appears to be re-organizing.

The persistent remnants of tropical cyclone Gillian have moved westward over 2,700 km/1,674 miles since forming in the Gulf of Carpentaria on March 8, 2014.

Gillian's coherent remnants were located just to the southeast of the Indonesian island of Java when the Tropical Rainfall Measuring Mission or TRMM satellite flew overhead on March 20, 2014 at 0415 UTC/12:15 a.m. EDT. TRMM's Precipitation Radar (PR) instrument revealed that intense convective storms in this area were still dropping rain at a rate of over 97 mm/3.8 inches per hour and returning radar reflectivity values of over 51dBZ. TRMM PR data were used to create a simulated 3-D view that showed the vertical structure of precipitation within the stormy area contained towering thunderstorms.

TCWC issued watches and warnings for parts of the Indonesia archipelago in Bahasa.

Warm sea surface temperatures and low vertical wind shear are expected to assist in Gillian's redevelopment. The Joint Typhoon Warning Center gives Gillian a medium chance for regeneration in the next 24 hours. 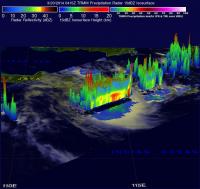