Washington, DC-- Bornean orangutans living in forests impacted by human commerce seek areas of denser canopy enclosure, taller trees, and sections with trees of uniform height, according to new research from Carnegie's Andrew Davies and Greg Asner published by Proceedings of the National Academy of Sciences.

Bornean orangutans are critically endangered, and despite intense conservation efforts, their numbers continue to decline. Additional habitat management strategies that account for their presence in forests affected by logging and other human activity are needed to ensure the species' survival.

That's why Davies and Asner, along with key partners in Malaysia, set out to determine which human-impacted forest areas are most-crucial to preventing orangutan extinction. Their research focused in the Lower Kinabatangan region of Sabah, Malaysia, on the island of Borneo. It consists of forest patches that have been highly degraded by timber extraction, which are sewn into a landscape of palm oil plantations and human settlements.

"Our combination of field and airborne data on orangutans and their habitat was key to understanding how they move through and use disturbed forests in Borneo," said first author Davies, a postdoc at Carnegie's Department of Global Ecology. "Similar approaches will be needed to determine the minimum habitat requirements of other endangered species in human-modified landscapes."

They found that orangutans preferentially selected certain canopy attributes within forests that had been disturbed or fragmented by human activity. This means that some human-impacted forest segments are more important than others for orangutan conservation.

Because of orangutans' size, they require strong branches to move laterally through the forest canopy. They can descend and cross large canopy gaps on the ground, but this wastes energy and exposes them to predators. This could explain their observed preference for enclosed canopy, tall trees, and areas with uniform tree height in the human-disturbed forests studied by the team.

The researchers had anticipated that areas with a great deal of vertical complexity would be preferentially selected to assist the orangutans with climbing up and down trees. But this proved not to be the case, as lateral movement appeared to be a greater need for the orangutans, based on the scientists' observations.

"In the course of a year, we took the CAO aircraft and team to northern Borneo, mapped its habitats in 3-D, combined the data with Marc's orangutan observations, and made a critically important scientific discovery that directly bears on the conservation of one of the world's most iconic ape species," said Asner, the project's leader.

Like many large vertebrates, orangutans play a particularly critical role in maintaining healthy ecosystem function. That's why it is so important that they be protected from the effects of human activity on the forests where they live.

"Considering that most of the critically endangered orangutan's habitat is disturbed by human activities, understanding the habitat elements required to ensure orangutan survival in degraded forests is key for their long-term survival," added Marc Ancrenaz of HUTAN/Borneo Futures, a core project partner.

The results of this orangutan study contribute to a larger Bornean biodiversity mapping mission co-led by Carnegie and the South East Asia Rainforest Research Partnership (SEARRP). The research group, along with government and NGO partners in Sabah, are in the process of generating a portfolio of ecological maps, ranging from forest carbon stocks to plant and animal biodiversity. The forthcoming maps have been hailed as key input to an upcoming decision by the Sabah Forestry Department about what area should next be designated as protected.

"This orangutan study is another critical piece of information we are assembling to support the Sabah government to determine where to save the most species in this super-biodiverse region of the world," Asner added. 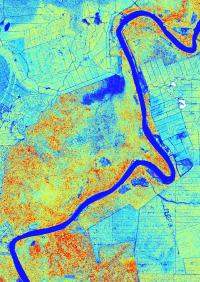