Scientists have used satellite tracking and a crime-scene technique to discover an important feeding ground for green turtles in the Mediterranean.

University of Exeter researchers measured "stable isotope ratios" - a chemical signature also used by forensic scientists - to discover which foraging grounds turtles had come from to breed in Cyprus.

They discovered that Lake Bardawil, on Egypt's north coast, is now the most important foraging ground for turtles which breed at Alagadi in Cyprus.

The researchers believe few breeding females came from the Lake Bardawil feeding ground until 2010. It is likely that changes to the ecosystem have made this shallow saline lake a top foraging site.

"Our satellite tracking of turtles breeding in Cyprus has been going on for some years," said senior author Professor Brendan Godley, director of the Centre for Ecology and Conservation on the University of Exeter's Penryn Campus in Cornwall.

"This meant we knew where many of the turtles went to forage for food, but our preliminary analysis using stable isotope ratios showed a major foraging area had been missed.

"A large proportion of turtles had isotope ratios that did not correspond to sites previously identified, and we tracked five of them. Five out of five went to Lake Bardawil."

Green turtles swim hundreds of miles between feeding and breeding areas, and the research suggests 82 per of females show "extremely high" consistency in isotope ratios - meaning they keep going back to the same places.

In terms of stable isotope ratios, animals "are what they eat", meaning tests can reveal where they have spent time.

"This research demonstrates how stable isotope analysis can help us learn more about the lives of species like green turtles," said first author Dr Phil Bradshaw, also from the University of Exeter.

"Using a combination of this analysis and satellite tracking gives us more reliable data, and this can be used to measure the success of future conservation efforts." 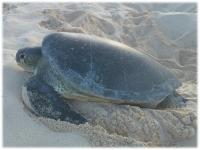