Coral trout not only work with moray eels to improve their chances of a meal, but they can also be choosy when it comes to picking the best moray partner. The findings reported in the Cell Press journal Current Biology on September 8 show that such sophisticated collaborative abilities are not limited to apes and humans.

The fish's behavior is remarkable in other ways too, the researchers say.

"The trout's collaboration appears to be relatively special, as it uses gestures to coordinate its hunts with partners of different species, such as morays, napoleon wrasse, and octopus," says Alexander Vail of the University of Cambridge.

Those other species are of more use to trout as hunting partners than members of its own species because the other species flush prey out of reef crevices in a way that the fish themselves can't, Vail explains. Their relationship to morays may be considered as social tool use: fish can't pick up a stick to pry something out of a crevice, but they can use intentional communication to manipulate the behavior of a suitable other species to achieve the same end-goal.

Chimpanzees are known to work with other chimpanzees to hunt in the wild, with individuals taking on different roles, such as chasers or blockers. Earlier studies have shown that chimpanzees also make good choices when it comes to selecting the best partner among their peers. Those collaborative skills have been interpreted as evidence for advanced cognitive processes in our closest primate relative, potentially representing the evolutionary origins of our complex human collaboration.

But Vail and his colleagues wondered whether those collaborative abilities might also be found in other, more distantly related species. They found the best candidate in a rather surprising place: among a genus of fishes known as Plectropomus. In fact, studies have shown that roving coral grouper fish will team up with moray eels, too. More recently, Vail found that coral trout also hunt collaboratively with moray eels on the Great Barrier Reef.

To examine the collaborative tendencies of the fish in greater detail, the researchers brought some of those fish back to the lab to test their interactions with moray eel decoys, one "good" and one "bad." The "good" moray would come to the coral trout's aid when signalled, whereas the "bad" one would swim in the opposite direction. In fact, some morays in nature are more helpful to trout than others.

By watching these interactions, the researchers found that trout were similarly proficient to chimpanzees at determining when to collaborate. The researchers' observations also showed that coral trout were quick to learn which moray eel model was the better collaborator.

As stunning as they are, the findings in fish may not prove as unique as they seem.

"Our study shows that these collaborative skills are not confined to apes and raises the possibility that they may be found in a number of other animal species for which they are ecologically relevant," Vail says.

Current Biology, Vail et al.: "Fish choose appropriately when and with whom to collaborate" 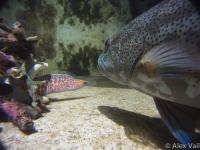