You're at the office. You've typed up a report and press print. Walk over to the printer and retrieve the fresh, inkjet-printed paper. As you admire your work, were you aware that scientists consider the charge of the particles in the liquid ink for improved print quality? Were you aware that understanding charges of particles allows for engineers to make the paints aggregate (gather together) or disperse according to such particle interactions?

A surfactant is something that is added to a liquid (in this study), to make it act with other surfaces. People use surfactants daily at home with soaps, detergents and shampoos to aid in lifting grime off of surfaces. Surfactants also have important industrial uses such as in the lining of pipelines to reduce drag. As one can imagine, understanding how the effect of charges of particles in liquid can have significant impact on how well surfactants work and systems run efficiently. Until now, there was an absence of exploration into how the flow of liquids effect the charges of the particles in the liquid, surfaces and surfactants.

To investigate flow, Cathy McNamee and Hayato Kawakami of Shinshu University built an apparatus where they combined an Atomic Force Microscope, peristaltic pump and camera to visually capture the liquid in the process of flow. They used silica particles and silicon wafers, both with negatively charged surfaces in the presence of ionic surfactants. An ionic surfactant has a "head" that attracts water and a "tail" that repels water. A negative and positive surfactant of the same chain length was used to determine the effect of the charge on the forces, sodium dodecyl sulfate (anionic surfactant) and dodecyl trimethylammonium bromide (cationic surfactant).

McNamee and Kawakami were able to determine that:

* The adsorption of the surfactants to the particles can change when the liquid flow changes the forces between charged particles.

* It might be possible to control the aggregating ability of charged particles with the flow rate if the appropriate surfactant type and concentration is used.

Professor McNamee found that the flow rate can possibly be used to control the aggregation and dispersion of charged particles, allowing for less surfactant use. During real world uses such as water treatment, it is possible to remove impurities and harmful substances by using charges to gather or repel certain substances. Even our bodies cleverly use surfactants, too. Bile salts, (a surfactant!) aids in digestion. The potential applications of this research range from medicine, such as flow cytometer to all aspects of industry.

More details can be found on the cover paper of the March issue of Langmuir.

This research was accepted in the ACS journal of Langmuir, and is now available on-line on the Langmuir website. An image depicting this work was also chosen for the supplementary cover of this journal issue.

How does flow effect forces of charged surfaces/particles and surfactants in liquids? 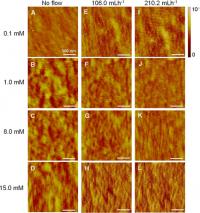 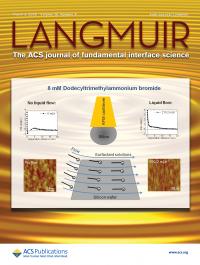