During this year's Atlantic hurricane season, NASA is redoubling its efforts to probe the inner workings of hurricanes and tropical storms with two unmanned Global Hawk aircraft flying over storms and two new space-based missions.

NASA's airborne Hurricane and Severe Storm Sentinel or HS3 mission, will revisit the Atlantic Ocean for the third year in a row. HS3 is a collaborative effort that brings together several NASA centers with federal and university partners to investigate the processes that underlie hurricane formation and intensity change in the Atlantic Ocean basin. The flights from Wallops Flight Facility in Virginia take place between Aug. 26 and Sept. 29 during the peak of the Atlantic hurricane season that runs from June 1 to Nov. 30.

One of the remaining mysteries that HS3 is attempting to solve is the effect of the hot, dry and dusty Saharan Air Layer (SAL) in tropical storm formation and intensification. Some research points to SAL contributing to storm formation, while other research indicates SAL suppresses it. HS3 also will investigate the role of strong thunderstorms near the core of the storms as a possible driver of intensity change.

This year NOAA, in addition to managing all of the dropsondes during the HS3 mission, will enable the mission to fly another week to better study tropical cyclones. A dropsonde is a device that measures winds, temperature and humidity, dropped from an aircraft.

The NASA Global Hawks are unmanned aircraft that will be piloted remotely from the HS3 mission control at NASA's Wallops Flight Facility. Global Hawk aircraft are well-suited for hurricane investigations because they can fly for as long as 26 hours and fly above hurricanes at altitudes greater than 55,000 feet.

One Global Hawk will carry three instruments to examine the environment around the storms, including the Scanning High-resolution Interferometer Sounder (S-HIS), the Advanced Vertical Atmospheric Profiling System (AVAPS), also known as dropsondes, and the Cloud Physics Lidar (CPL).

The GPM mission, launched Feb. 27, will provide rainfall measurements every three hours around the globe, and will complement the HS3 mission. Like GPM's predecessor, the Tropical Rainfall Measuring Mission, GPM will continue to provide insights into the dynamics of a storm, such as how the storm's structure changes over the life cycle of the storm, including intensification and decay stages, and how storm intensification may depend on the presence of deep thunderstorms, known as hot towers, near the eyewall. The GPM mission will extend coverage to higher latitudes and improve scientists' ability to evaluate how storms change in intensity and structure as they move into the extra-tropics.

The ISS-RapidScat instrument, managed by NASA's Jet Propulsion Laboratory (JPL) in Pasadena, California, is slated for launch to the International Space Station in August. RapidScat will measure ocean surface winds in Earth's tropics and mid-latitudes and will provide useful data for weather forecasting of marine storms.

NASA monitors Earth's vital signs from land, air and space with a fleet of satellites and ambitious airborne and ground-based observation campaigns. NASA develops new ways to observe and study Earth's interconnected natural systems with long-term data records and computer analysis tools to better see how our planet is changing. The agency shares this unique knowledge with the global community and works with institutions in the United States and around the world that contribute to understanding and protecting our home planet. 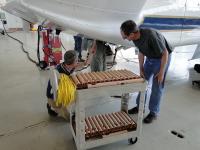