Temple University's scientists Sudhir Kumar and S. Blair Hedges, of the Institute for Genomics and Evolutionary Medicine (iGEM) and Center for Biodiversity, have had a longstanding goal to develop easy-to-use tools to make evolution more accessible for everyone---from leading scientists to students in elementary school.

In the seven years since its initial release, their TimeTree web has done just that, becoming a widely used evolutionary biology resource, with more than 250,000 queries from worldwide users.

As Kumar and Hedges mentioned in their TimeTree book (2009, Oxford University Press) introduction, before he published his Origin of the Species, Darwin predicted to Thomas Henry Huxley: "The time will come, I believe, though I shall not live to see it, where we shall have fairly true genealogical trees of each great kingdom of Nature."

That golden age of a global family tree of life on Earth is upon us now with the widespread use of next-generation DNA sequencing generating millions of sequence data that have been deposited in national gene repositories. This has been the result of five decades' worth of effort to tell molecular time----and species divergence----from the similarities and differences in the random, often single DNA mutations that have accumulated over eons.

The next generation TimeTree web can now help make it easier for people to make sense of much of that data. Imagine the history of life on Earth at your fingertips combined with the power to quickly cull five decades' worth of all the evolutionary sequencing data and studies.

They've made the most substantial update to build and develop a free, next generation TimeTree web, packed with even more features. TimeTree web not only allows access to all of the published molecular data from 3,000 published research studies covering 97,000 different species, but combines it with embedded geological timelines, environmental and climate epochs, sun intensity data, and even cosmic collisions from great asteroids bombardments.

"The extraordinary amount of scientific knowledge on divergence time remained underutilized by a vast majority of scientists and the general public. Our TimeTree resource breaks that barrier and makes the time information easily accessible," Says Kumar.

As before, users can quickly compare the divergence time of any two species using the Nodetime view, but also for the first time, a timetree of groups of species can be shown in the Timetree view, and a species' evolution through time can be traced in Timeline view.

"We envision that these expanded features, with the co-visualization of the organismal divergences and events in the earth history, will lead to new insights into the history of life. We hope TimeTree will broaden and lead to a better understanding of the interplay of the change in the biosphere with the diversity of species on Earth. And we anticipate adding hundreds of new studies each year to expand TimeTree continuously and serve the community," says Hedges.

From the expert to the citizen scientist to the next-generation of explorers, the new and improved version of TimeTree makes evolutionary biology even more accessible to everyone, and to ponder Darwin's poetic endnote to his Origin of Species of life on Earth as "endless forms most beautiful."

The next generation TimeTree resource is publicly available online at http://www.timetree.org, it can be accessed on desktop computers and mobile devices. A simplified iPhone app is available from the AppStore (search for "TimeTree").

Next Generation TimeTree: An expanded history of life on Earth at your fingertips 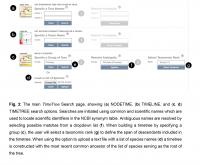 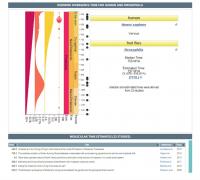