When a star unleashes as much energy in a matter of days as our Sun does in several billion years, you know it's not going to remain visible for long.

Like intergalactic paparazzi, NASA's Hubble Space Telescope captured the quick, fading celebrity status of a supernova, the self-detonation of a star. The Hubble snapshots have been assembled into a telling movie of the titanic stellar blast disappearing into oblivion in the spiral galaxy NGC 2525, located 70 million light-years away.

Hubble began observing SN 2018gv in February 2018, after the supernova was first detected by amateur astronomer Koichi Itagaki a few weeks earlier in mid-January. Hubble astronomers were using the supernova as part of a program to precisely measure the expansion rate of the universe -- a key value in understanding the physical underpinnings of the cosmos. The supernova serves as a milepost marker to measure galaxy distances, a fundamental value needed for measuring the expansion of space.

In the time-lapse sequence, spanning nearly a year, the supernova first appears as a blazing star located on the galaxy's outer edge. It initially outshines the brightest stars in the galaxy before fading out of sight.

"No Earthly fireworks display can compete with this supernova, captured in its fading glory by the Hubble Space Telescope," said Nobel laureate Adam Riess, of the Space Telescope Science Institute (STScI) and Johns Hopkins University in Baltimore, leader of the High-z Supernova Search Team and the Supernovae H0 for the Equation of State (SH0ES) Team to measure the universe's expansion rate.

The type of supernova seen in this sequence originated from a burned-out star -- a white dwarf located in a close binary system -- that is accreting material from its companion star. When the white dwarf reaches a critical mass, its core becomes hot enough to ignite nuclear fusion, turning it into a giant atomic bomb. This thermonuclear runaway process tears the dwarf apart. The opulence is short-lived as the fireball fades away.

Because supernovae of this type all peak at the same brightness, they are known as "standard candles," which act as cosmic tape measures. Knowing the actual brightness of the supernova and observing its brightness in the sky, astronomers can calculate the distances of their host galaxies. This allows astronomers to measure the expansion rate of the universe. Over the past 30 years Hubble has helped dramatically improve the precision of the universe's expansion rate. 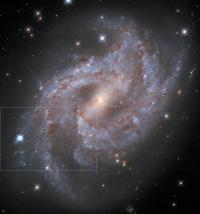