Fishery and aquaculture have given rise to an enormous uniformity in the diversity of bivalves along the more than 18,000 kilometer long Chinese coast, biologist He-Bo Peng and colleagues report in this month's issue of Diversity and Distributions.

Peng and colleagues sampled bivalves at 21 sites along the Chinese coast from the city of Dongliaodao in the tropical south, to the mudflats of Yalu Jiang, more than 2000 km further north and ice-covered for several months in winter. "At 19 out of these 21 sites, commercially exploited species dominated", Peng saw. "In the naturally occurring species, we still recognized the natural gradient with highest diversity in the tropics and lowest diversity in the north. However, the same commercially exploited species were found in all regions, regardless the climatic conditions. Also, the commercial species dominated almost all mudflat communities."

One of the dominant species nowadays is Potamocorbula laevis. Peng: "At some locations, this bivalve represented 95% of the biomass." This is not necessarily due to the culturing of this bivalve. "The intensive fishing for shrimps has almost eradicated a natural enemy of the small fragile juveniles of this bivalve. Possibly, this lack of predators has now favored P. laevis."

The eradication of the south to north biodiversity gradient and the dominance of commercially exploited bivalve species may be a blessing in disguise for migratory birds along the Chinese coast. Peng: "At sites where there's a lot of p. laevis now, migratory birds like red and great knots find a lot of food as they refuel during their migrations between Australia and the tundra areas of northeast Russia. But the more general point raised by this study is the immensity of the role of human activities in determining coastline biodiversity. Where once there was a strong climate gradient in biodiversity, aquaculture and fisheries have favored uniformity now."

"This extensive research along more than 18,000 km of Chinese coast builds on the Dutch tradition of studying mudflat ecosystems", Theunis Piersma, researcher at NIOZ and promotor of PhD-student Peng as professor of global flyway ecology at the University of Groningen, says. "Sampling programs like SIBES in the Dutch Wadden Sea taught us the value of widespread and continuous sampling. In this study He-Bo Peng once again shows the value of documenting benthos at very large spatial scales, with sampling strategies developed in the Wadden Sea."

Aquaculture turns biodiversity into uniformity along the coast of China 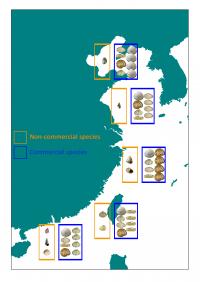 Grphic abstract of bivalves found along the Chinese coast.