NASA satellites have been monitoring Tropical Cyclone Evan and providing data to forecasters who expected the storm to intensify. On Dec. 13, Evan had grown from a tropical storm into a cyclone as NASA satellites observed cloud formation, height and temperature, and rainfall rates.

The Tropical Rainfall Measuring Mission (TRMM) satellite passed above intensifying tropical storm Evan in the South Pacific Ocean on Dec. 11, 2012 at 1759 UTC (12:59 p.m. EST/U.S.). An analysis of Evan's rainfall from TRMM's Precipitation Radar (PR) and Microwave Imager (TMI) showed that Evan already had an eye-like structure at the time of that TRMM orbit. Evan would later develop an eye on Dec. 13.

TRMM's 3-D Precipitation Radar (PR) data captured on Dec. 11 were used to measure the heights of Evan's storm tops. It found that the tallest thunderstorms shown around Evan's center of circulation reached 16.5 km (10.25 miles) indicating powerful storms and heavy rainmakers. Other thunderstorm cloud tops nearby were measured at 14.75 km (9.17 miles).

NASA's Aqua satellite passed over Tropical Cyclone Evan after it had attained cyclone status on Dec. 13 and two instruments provided insight into what was happening with the storm.

The Moderate Resolution Imaging Spectroradiometer (MODIS) instrument aboard NASA's Aqua satellite captured a visible image of Tropical Cyclone Evan when it was directly over the Samoa Islands on Dec. 13 at 0105 UTC. Evan's maximum sustained winds had increased to 90 knots (103 mph/166.7 kph).

The other instrument aboard Aqua that captured data from Evan was the Atmospheric Infrared Sounder (AIRS) instrument. AIRS captured an infrared image of Tropical Cyclone Evan at 0059 UTC. The infrared image showed a compact, circular area of strong thunderstorms around Evan's center that reached high into the troposphere where temperatures are as cold as -63 Fahrenheit (-52 Celsius). Those areas also indicated heavy rainfall. Infrared imagery also showed that Evan's eye was about 6 nautical miles wide. Imagery also showed tightly-curved deep convective (rising air that creates the storms that make up the cyclone) banding of thunderstorms were wrapping into the center.

Evan is expected to track to the west and continue strengthening over the next couple of days. 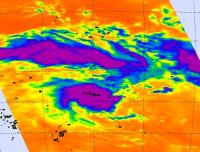