It has been more than 50 years since a full-length book was written about the Colored Conventions Movement -- the 19th century's longest campaign for Black civil rights. In 1969, Howard Holman Bell, a scholar of African American history, published "The Negro Convention Movement: 1830-1861," his dissertation. Bell's book has stood as the only full-length volume on Black conventions that were organized across North America and attended by tens of thousands of Black delegates and likely hundreds of thousands of participants from all walks of life.

More than half a century after Bell's book, another has finally been published.

"The Colored Conventions Movement: Black Organizing in the Nineteenth Century," published by the University of North Carolina Press and released in March, is the first to emerge from the award-winning Colored Conventions Project (CCP), an interdisciplinary research hub housed in Penn State's Center for Black Digital Research (CBDR). The CCP uses digital tools to bring the scattered records of the movement to digital life and make them freely available. Its digital archive has more than quintupled the number of previously available minutes of more than 200 conventions by locating, transcribing, and archiving the records that document this little-known movement.

Through essays covering myriad topics such as education, voting rights, workers' rights, the Black press, and convention women, "The Colored Conventions Movement: Black Organizing in the Nineteenth Century" highlights the vital role the Colored Conventions played in the lives of tens of thousands of early organizers -- including many of the most famous writers, ministers, politicians, and entrepreneurs in the early history of Black activism.

"The Colored Conventions Movement is the 19th century's longest campaign for Black civil rights," Foreman said. "Well before the founding of the NAACP and other 20th-century pillars of the civil rights movement, Black leaders organized state and national conventions across North America. Over seven decades, they advocated for social justice and against slavery, protesting state-sanctioned and mob violence while demanding voting, legal, labor and educational rights."

Foreman, noting the CCP was sparked in 2012 by a graduate class she was teaching -- Casey and Paterson were students in the class -- said the book is the first of "scores of books" she imagines will come from the work of the CCP.

"It was always our vision to build an archive and to generate new scholarship and public histories about Black organizing, Black activism and Black autonomy in the 19th century," she said. "This book is the very first edited volume about the conventions, which is stunning when we think of the vast array of volumes, special issues, biographies and books about the abolitionist movement. The conventions started three years before the Massachusetts Antislavery Society and the American Antislavery Society and continued for 30 years after the abolitionist movement."

"We've been working many years on this book, so it's a delight to see it finally published," Casey said, adding that they were "flooded" with proposals for essays to be included. "For me, the great thing about the book is the chance to throw open the doors and invite more people in to learn about these histories and to talk about what they mean to different people."

"The conventions were held everywhere across the country, in at least 34 different states across 70 years," he added. "The longer arc of our work is about finding better and better answers to questions like 'Why don't I know about this history already?' 'Why is it so difficult to access the records of these people and their lives and legacies?' This book is not only for scholars; it is accessible for people from all walks of life. Both the Colored Conventions Project and now this book give us ways to retell not just African American history but also United States history."

Foreman asked, "What does it mean that the country has been effectively overwriting and ignoring organized Black advocacy for basic citizenship for this long?" and added that she hopes that interested people will purchase the book from Black-owned bookstores (several of which are listed on the Colored Conventions Project website). "These are the central questions this movement and this book raises. This scholarship only highlights the larger questions our country needs to reckon with."

Foreman and Casey will discuss "The Colored Conventions Movement: Black Organizing in the Nineteenth Century" on an upcoming Democracy Works podcast. The episode, which goes live at 5 a.m. on April 26, can be found at https://democracyworks.simplecast.com/episodes/colored-conventions. 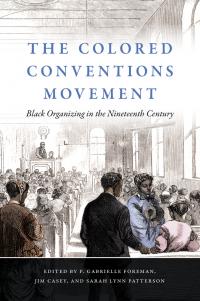