Ichthyosaurs, which are similar-shaped to dolphins and sharks, but are reptiles, swam the seas for millions of years during the Triassic, Jurassic and Cretaceous periods. They were the first, large extinct reptiles brought to the attention of the scientific world.

Dean Lomax, a palaeontologist and Honorary Scientist at The University of Manchester, working with Professor Judy Massare of Brockport College, New York, have studied thousands of ichthyosaur fossils and have delved through hundreds of years of records to solve an ancient mystery.

Many ichthyosaur fossils were found in England during the early 19th century, but it was not until 1821 that the first ichthyosaur species was described - called Ichthyosaurus communis. This species has become one of the most well-known and iconic of all the British fossil reptiles. A sea of Ichthyosaurus fossils can be seen on display at the Natural History Museum, London.

In 1822, three other species were described, based on differences in the shape and structure of their teeth. Two of the species were later re-identified as other types of ichthyosaur, whereas one of these species, called Ichthyosaurus intermedius, was still considered closely related to I. communis.

In the years that followed, many eminent scientists, including Sir Richard Owen (the man who coined the word dinosaur), studied ichthyosaur fossils collected from Dorset, Somerset, Yorkshire and other locations in England. Their studies and observations of Ichthyosaurus communis and I. intermedius resulted in confusion with the species, with many skeletons identified on unreliable grounds.

Lomax said, "The early accounts of ichthyosaurs were based on very scrappy, often isolated, remains. This resulted in a very poor understanding of the differences between species and thus how to identify them. To complicate matters further, the original specimen of Ichthyosaurus communis is lost and was never illustrated.

Similarly, the original specimen of I. intermedius is also lost, but an illustration does exist. This has caused a big headache for palaeontologists trying to understand the differences between the species".

In the mid-1970s, palaeontologist, Dr Chris McGowan was the first to suggest that Ichthyosaurus communis and I. intermedius may represent the same species. He could not find reliable evidence to separate the two species. Subsequent studies argued for and against the separation of the species.

In this new study, the duo have reviewed all of the research for and against the separation of the two species. This is the most extensive scientific study ever published comparing the two. The duo confirm the species are the same and that features of Ichthyosaurus intermedius can be found in other ichthyosaur species, including I. communis.

In recent years, the duo have described three new species and have provided a reassessment of historical species. Their work has provided a far superior understanding of the species than has ever been produced.

The research has been published in Journal of Systematic Palaeontology.

When referencing the article: Please include Journal title, author, published by Taylor & Francis and the following statement:

Dean Lomax is a multiple award-winning palaeontologist, science communicator and author. He has travelled around the world and worked on many fascinating projects from excavating dinosaurs in the American West to discovering new fossil hunting locations and describing new species of extinct marine reptiles in the UK. An Honorary Scientist at The University of Manchester, Dean is passionate about communicating palaeontology and actively engages with traditional and social media. He has written two books, numerous scientific papers and many popular articles and regularly appears on television, most recently as series advisor and recurring on-screen expert presenter for ITV's Dinosaur Britain. Dean is also the patron of the UK Amateur Fossil Hunters organisation. More here: http://www.deanrlomax.co.uk.

For more information, or a copy of the study please contact:

The University of Manchester, a member of the prestigious Russell Group of British universities, is the largest and most popular university in the UK. It has 20 academic schools and hundreds of specialist research groups undertaking pioneering multi-disciplinary teaching and research of worldwide significance. The University is one of the country's major research institutions, rated fifth in the UK in terms of 'research power' (REF 2014), has had no fewer than 25 Nobel laureates either work or study there, and had an annual income of just over £1 billion in 2014/15. Visit http://www.manchester.ac.uk. 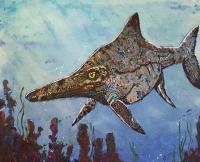 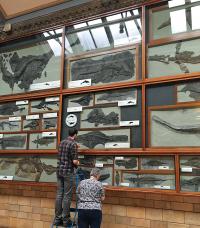