Testing teams have successfully completed a critical milestone focused on demonstrating that NASA's James Webb Space Telescope will respond to commands once in space.

Known as a "Ground Segment Test," this is the first time commands to power on and test Webb's scientific instruments have been sent to the fully-assembled observatory from its Mission Operations Center at the Space Telescope Science Institute (STScI) in Baltimore, Maryland.

Since reliably communicating with Webb when in space is a mission-critical priority for NASA, tests like these are part of a comprehensive regimen designed to validate and ensure all components of the observatory will function in spacewith the complex communications networks involved in both sending commands, and downlinking scientific data. This test successfully demonstrated the complete end-to-end flow from planning the science Webb will perform to posting the scientific data to the community archive.

"This was the first time we have done this with both the actual Webb flight hardware and ground system. We've performed pieces of this test as the observatory was being assembled, but this is the first ever, and fully successful, end-to-end operation of the observatory and ground segment. This is a big milestone for the project, and very rewarding to see Webb working as expected," said Amanda Arvai, Deputy Division Head of Mission Operations at STScI in Maryland.

In this test, commands to sequentially turn on, move, and operate each of Webb's four scientific instruments were relayed from the Mission Operations Center. During the test, the observatory is treated as if it were a million miles away in orbit. To do this, the Flight Operations Team connected the spacecraft to the Deep Space Network, an international array of giant radio antennas that NASA uses to communicate with many spacecraft. However, since Webb isn't in space yet, special equipment was used to emulate the real radio link that will exist between Webb and the Deep Space Network when Webb is in orbit. Commands were then relayed through the Deep Space Network emulator to the observatory, which is currently inside a Northrop Grumman clean room in Redondo Beach, California.

"This was also the first time we've demonstrated the complete cycle for conducting observations with the observatory's science instruments. This cycle starts with the creation of an observation plan by the ground system which is uplinked to the observatory by the Flight Operations Team. Webb's science instruments then performed the observations and the data was transmitted back to the Mission Operations Center in Baltimore, where the science was processed and distributed to scientists," said Arvai.

When Webb is in space, commands will flow from STScI in Baltimore to one of the three Deep Space Network locations --California, Spain, or Australia. Signals will then be sent to the orbiting observatory nearly one million miles away. Additionally the NASA's Tracking and Data Relay Satellite network, the Space Network in New Mexico, the European Space Agency's Malindi station in Kenya, and European Space Operations Centre in Germany will also aid in keeping a constant line of communication open with Webb at all times.

To complete the ground segment test a team of nearly 100 people worked together through the course of four consecutive days. Due to staffing restrictions in place due to the coronavirus (COVID-19) pandemic, only seven individuals were present inside the Mission Operations Center, with the rest working remotely to routinely monitor progress. Next up for Webb: observatory level acoustic and sine-vibration testing that will demonstrate that the assembled telescope is capable of surviving the rigors of launch by exposing it to similar conditions.

Webb is NASA's next great space science observatory, which will help in solving the mysteries of our solar system, looking beyond to distant worlds around other stars, and probing the mystifying structures and origins of our universe. Webb is an international program led by NASA, along with its partners ESA (European Space Agency) and the Canadian Space Agency.

For more information about Webb, go to: https://www.nasa.gov/webb 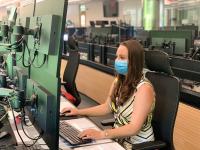 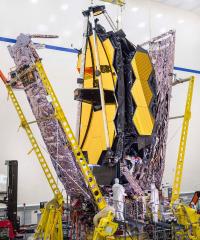