NEW ORLEANS - Women who are unable to produce enough breast milk for their children are increasingly turning to "mother-to-mother" informal milk-sharing, a potentially unsafe practice that is discouraged by the pediatric medical community, according to new research being presented at the American Academy of Pediatrics (AAP) 2019 National Conference & Exhibition.

The research abstract, "Where to get Donor Breast Milk? Self-Reported Parental Motivations and Concerns Regarding the Choice of Informal Milk Sharing versus Milk Banks," will be presented on Saturday, Oct. 26 at the Hilton New Orleans Riverside in Grand Ballroom A.

A related research abstract by the same author, "An Analysis of Parental Opinions of Human Milk Sharing Options," will be presented during the same session.

"Informal milk sharing is becoming increasingly popular and widespread," said Nikita Sood, researcher at Cohen Children's Medical Center/Northwell Health in New York. "It is therefore crucial that physicians become aware of this practice and the associated risks so that they can educate patients and address this growing concern."

More than 50% of 650 mothers who responded anonymously to a survey shared on Facebook said they did not have any safety concerns about the informally donated breast milk, and almost 80% did not medically screen the donors because they "trusted them." AAP discourages the use of informally shared breast milk because of the risks of potential spreading of disease or exposure to medications, alcohol, illegal drugs or other contaminants.

AAP recommends exclusive breastfeeding until about 6 months of age, followed by continued breastfeeding as complementary foods are introduced. Women who are unable to produce enough milk to exclusively breastfeed their child may supplement infant diets with formula or donor breast milk that is available through formal milk banks. More than half of the survey respondents who do not use a milk bank to obtain breast milk cited concerns about the cost, followed by concerns about quality and ability to obtain a prescription for breast milk.

"Not only are our patients unaware of the potential risks that they are undertaking when participating in these informal milk sharing practices, they are also often not informing their physicians," Ruth Milanaik, DO, at Cohen Children's Medical Center/Northwell Health in New York said. "In addition to educating patients, physicians must underscore the importance of discussing these habits with medical professionals so that we have the necessary information to make accurate diagnoses should a medical need arise."

Nikita Sood will present both abstracts, between 8 a.m. and 1:30 p.m. on Saturday, Oct. 26, during the Joint Section on International Child Health and Section on Breastfeeding Program at the Hilton New Orleans Riverside in Grand Ballroom A.

In addition, Nikita Sood and Dr. Ruth Milanaik will be among highlighted abstract authors will give brief presentations and be available for interviews during a press conference and luncheon on Saturday, October 26, starting at 12:30 p.m. in rooms 208-209 (Press Office) of the Ernest N. Morial Convention Center. During the meeting, you may reach AAP media relations staff in the National Conference Press Room at 504-670-5406.

Please note: Only the abstract is being presented at the meeting. In some cases, the researcher may have more data available to share with media, or may be preparing a longer article for submission to a journal.

Abstract Title: Where to get Donor Breast Milk? Self-Reported Parental Motivations and Concerns Regarding the Choice of Informal Milk Sharing versus Milk Banks

Introduction: The American Academy of Pediatrics (AAP) recommends exclusive breastfeeding prior to 6 months of age. However, many women are unable to produce enough milk to exclusively breastfeed their child and, thus, supplement infant diets with formula or donor breast milk (DBM). Though DBM is the ideal supplement to comply with AAP guidelines, it is often difficult for parents to obtain DBM safely from milk banks (MBs) and they are increasingly turning to informal "mother-to-mother" milk sharing (IMS) instead. Though this practice is discouraged by the AAP as it is potentially unsafe, few studies have examined parental perceptions of DBM and its sources. Purpose: To study motivations and concerns regarding DBM usage from MB and IMS. Methods: An anonymous survey was posted on Facebook and shared 330 times by various pages, including La Leche League USA, local La Leche Leagues, and state and local breastfeeding coalitions. Participants who self-identified as recipients of DBM reported from where they received DBM, why they chose that DBM source, and what concerns they had regarding DBM use as well as demographic questions. Results: A total of 655 responses (MB recipients: 35.6%, n=233; IMS 64.4%, n=422) were analyzed; 90.5% white. Of those who chose IMS, 55.9% (n=236) did not have any DBM concerns and 78.2% (n=330) stated that they did not medically screen the donors because they "trusted them." The greatest concerns over using DBM from IMS were alcohol/drug transmission (27.5%, n=116), potential disease transmission (24.6%, n=107), and bacterial contamination (19.7%, n=83) (Table 1). Motivations for using IMS over MBs were MB costs (53.3%, n=225), concerns about pasteurization affecting DBM quality in MBs (26.5%, n=112), and the inability to obtain prescriptions for MB DBM (23.0%, n=97). MB recipients cited health professional recommendation (45.5% n=106) and safety of breast milk (38.6%, n=90) as motivations for using MB (Table 2). Conclusion: Most respondents who reported obtaining DBM did so informally and the majority indicated they did not have concerns or take measures to reduce risks associated with IMS. It is clear that IMS participants underestimate these risks and, consequently, it is imperative that physicians educate parents on MBs and encourage safe milk sharing practices, including screening all potential donors in order to mitigate risks of disease and drug transmission through DBM.

The majority of milk bank recipients similarly had no concerns about the donor breast milk they were obtaining formally and the plurality cited the recommendation of a healthcare professional as their motivation for obtaining via milk bank.

Background: Mothers who are unable to breastfeed their infants can obtain donor breast milk (DBM) from lactating mothers through milk banks (MB) or informal, "mother-to-mother" donation. Informal milk sharing is discouraged by the American Academy of Pediatrics (AAP), but has become increasingly popular, most likely through online milk sharing groups and personal anecdotes shared on parenting blogs. To date, however, no study has examined parental opinions and practices regarding DBM use expressed online. Purpose: To study parental practices and perceptions of receiving/donating breast milk (BM) via informal/formal routes, as discussed on publicly-accessible online blogs. Methods: Blog posts were identified by a Google search of "parenting blog AND donor breast milk" or "parenting blog AND milk sharing." Posts about parents receiving/donating BM were categorized as formal/informal and donated/received; posts applicable to multiple categories were counted multiple times. Medical necessity for DBM, opinions regarding donation routes, concerns about DBM, presence of research evidence, and physician involvement were assessed. Results: Overall, 122 posts from 2010-present were analyzed (receiving, n=65; donating, n=57). Informal milk sharing accounted for 75.4% (n=49) of posts about receiving DBM and 69.7% (n=37) of posts about donating BM. Milk bank DBM recipients were more likely than informal recipients to have a medical necessity (75% vs 30.7%, p<.01), involve physicians (75% vs 26.5%, p< .01), and cite positive emotions (93.8% vs 61.2%, p< .05). Milk bank donors were more likely than informal donors to involve physicians (25% vs 2.7%, p<.05). Parents generally favored the donation route they utilized (p<.01). A thematic analysis of concerns with DBM found that disease transmission was a primary concern among users of both informal (recipients, 40.8%; donors, 21.6%) and formal (recipients, 31.3%; donors, 15%) routes. Bacterial contamination was also a main concern for MB recipients (31.3%). Conclusion: Given the prevalence of posts about informal milk donation, parents conducting online searches are more likely to find information about AAP-discouraged informal donation practices, most of which lacked important discussion of safety concerns. Furthermore, very few of those that partook in informal milk sharing discussed the practice with their physicians. It is therefore important that physicians proactively explain all milk donation options to parents and promote formal milk bank use while educating on the risks associated with obtaining BM informally. 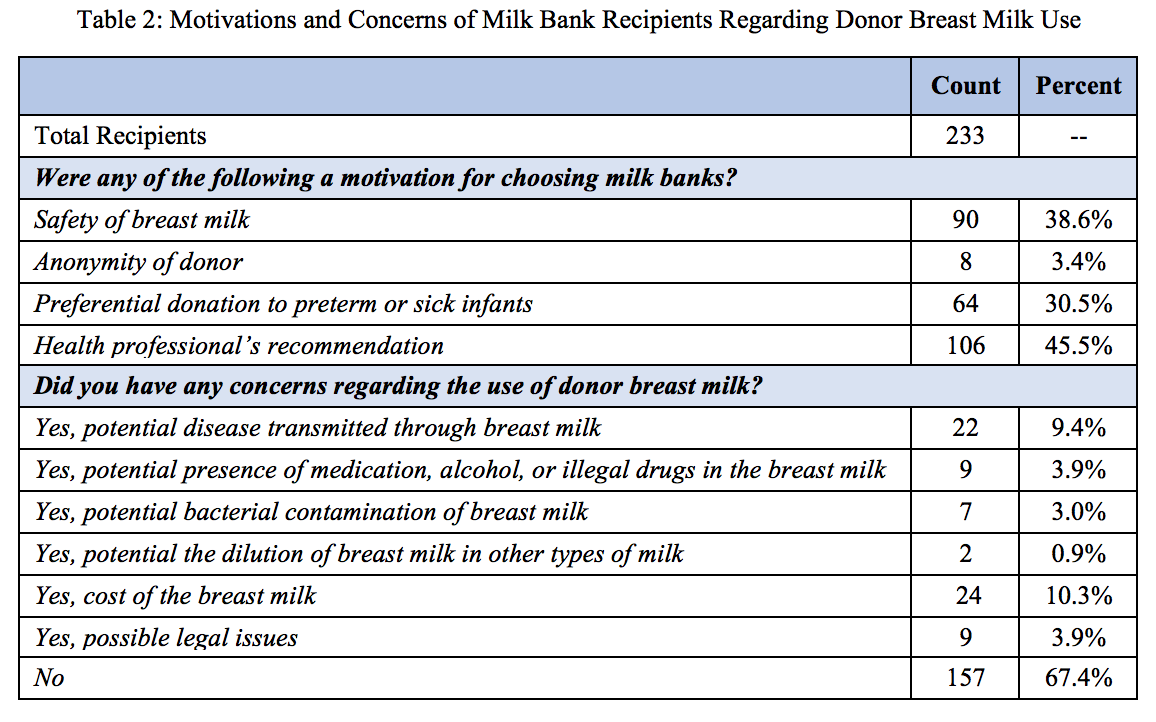