Researchers based millions of kilometres from Mars have unveiled new evidence for how contemporary features are formed on the Red Planet. Their innovative lab-based experiments on carbon dioxide (CO2) sublimation - the process by which a substance changes from a solid to a gas without an intermediate liquid phase - suggest the same process is responsible for altering the appearance of sand dunes on Mars.

The research was led by a Trinity College Dublin team comprising PhD candidate in the School of Natural Sciences, Lauren Mc Keown, and Dr Mary Bourke, along with Professor Jim McElwaine of Durham University. Their work, which describes phenomena unlike anything seen on Earth, has just been published in the Nature journal Scientific Reports.

Lauren Mc Keown said: "We've all heard the exciting news snippets about the evidence for water on Mars. However, the current Martian climate does not frequently support water in its liquid state -- so it is important that we understand the role of other volatiles that are likely modifying Mars today."

"Mars' atmosphere is composed of over 95% CO2, yet we know little about how it interacts with the surface of the planet. Mars has seasons, just like Earth, which means that in winter, a lot of the CO2 in the atmosphere changes state from a gas to a solid and is deposited onto the surface in that form. The process is then reversed in the spring, as the ice sublimates, and this seasonal interplay may be a really important geomorphic process."

Dr Bourke added: "Several years ago I discovered unique markings on the surface of Martian sand dunes. I called them Sand Furrows as they were elongated shallow, networked features that formed and disappeared seasonally on Martian dunes. What was unusual about them was that they appeared to trend both up and down the dune slopes, which ruled out liquid water as the cause."

"At that time I proposed that they had been formed by cryo-venting -- a process whereby pressurised CO2 gas beneath the seasonal ice deposit erodes complex patterns on the dune surface when the ice fractures and releases the gas in towering dust and gas geysers. I was delighted when Lauren joined the Earth and Planetary Surface Process Group in the Department of Geography to work on this phenomenon with Jim and myself. What was required was a demonstration of how sand would respond to sublimation of CO2 ice, and this published work is an important step in providing that required proof."

The researchers designed and built a low humidity chamber and placed CO2 blocks on the granular surface. The experiments revealed that sublimating CO2 can form a range of furrow morphologies that are similar to those observed on Mars.

Linear gullies are another example of active Martian features not found on Earth. They are long, sometimes sinuous, narrow carvings thought to form by CO2 ice blocks which fall from dune brinks and 'glide' downslope.

Lauren Mc Keown said: "The difference in temperature between the sandy surface and the CO2 block will generate a vapor layer beneath the block, allowing it to levitate and maneuver downslope, in a similar manner to how pucks glide on an ice-hockey table, carving a channel in its wake. At the terminus, the block will sublimate and erode a pit. It will then disappear without a trace other than the roughly circular depression beneath it."

"While gullies on Earth are commonly formed by liquid water, they almost always terminate in debris aprons and not pits. The presence of pits therefore provides more support for a hypothesis whereby CO2 blocks are responsible for linear gullies."

By sliding dry ice blocks onto the sand bed in the low humidity chamber, the group showed that stationary blocks could erode negative topography in the form of pits and deposit lateral levees. In some cases, blocks sublimated so rapidly that they burrowed beneath the subsurface and were swallowed up by the sand in under 60 seconds.

Professor McElwaine said: "This process is really unlike anything seen to occur naturally on Earth - the bed appears fluidised and sand is kicked up in every direction. When we first observed this particular effect, it was a really exciting moment."

By generating 3-D models of the modified bed in each case, pit dimensions could be used to predict the range of block sizes that would erode the pits seen on Mars, which vary in diameter from 1 m to up to 19 m. A pit on Russell Crater megadune on Mars was observed to grow within one Mars Year to an extent predicted by these calculations, following the observation of a block within it the previous year.

The next phase of work, supported by Europlanet Horizon 2020 funding, will see the team head to the Open University Mars Chamber to assess the influence of Martian atmospheric conditions on these new geomorphic processes and test a numerical model developed by Professor McElwaine.

This research was partly funded by the Irish Research Council Government of Ireland Postgraduate Scholarship.

Winters on Mars are shaping the Red Planet's landscape 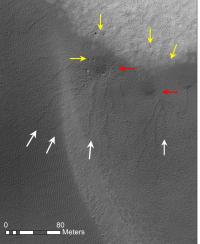