"Enter the Dragon" takes on a whole new meaning this month as SpaceX's Dragon capsule heads to the International Space Station for its third commercial resupply mission on April 14. During the SpaceX-3 mission, the Dragon capsule not only will deliver cargo to the orbiting laboratory, but it also will return science samples and hardware to Earth.

One of the new investigations aboard SpaceX's capsule is the Optical Payload for Lasercomm Science (OPALS). OPALS tests the use of laser optics to transfer information to the ground. Using a laser beam instead of radio frequency could improve communication data rates by a factor of 10 to 100. Lasers help provide a more efficient transmission, which can be hundreds to thousands of times narrower in comparison to radio waves. With this improved transmission rate, future missions may benefit from the ability to send increased amounts of data down to scientists using the same amount of power resources as before.

The optical communication demonstration will transfer video from the space station to a ground receiver located at NASA's Optical Communications Telescope Laboratory in Wrightwood, Calif., which is part of the agency's Jet Propulsion Laboratory (JPL). A ground telescope will transmit a laser beacon to OPALS on the space station as it travels across the sky. An onboard camera system on the station will track the signal to maintain connection during the demonstration, and OPALS will downlink a laser beam with a formatted video to the ground.

"It's like trying to use a laser to point to an area that's the diameter of a human hair from 20-to-30 feet away while moving at half-a-foot per second," said OPALS Systems Engineer Bogdan Oaida of JPL. "It's all about the pointing."

Each OPALS demonstration will last for approximately 100 seconds as the space station equipment and ground telescope maintain line of sight.

Another new study launching in March is the T-Cell Activation in Aging investigation, which seeks to identify the defect in T-cell activation -- an immune response used to fight foreign antigens -- during microgravity exposure. T-cells are a type of white blood cell that are coated with chemical receptors that must activate together to run the body's immune system properly.

As people age, immune function deteriorates over a long period of time and results in a significantly reduced ability to fight infection and disease. The reasoning for this is not understood fully, but these same types of changes in immune response are found to occur in healthy crew members during spaceflight. Changes in immune cells influenced by microgravity are found to occur rapidly at the molecular level. With this discovery, microgravity provides an excellent platform to investigate functional changes to immunity that normally take place over a period of time.

This research may help in understanding and treating a range of auto-immune diseases such as arthritis and diabetes. Identifying this defect may someday inhibit the decline of the immune system as a normal part of the aging process.

The Vegetable Production System (Veggie) is a new investigation with "edible results" heading to the space station. Veggie is a deployable plant growth unit capable of producing salad-type crops to provide the crew with appetizing, nutritious and safe fresh food and support crew relaxation and recreation. It will serve as a new space station facility as well and will provide a venue for future plant growth research.

"Based upon anecdotal evidence, crews report that having plants around [from previous space studies] was very comforting and helped them feel less out of touch with Earth," said Gioia Massa, a project scientist at NASA's Kennedy Space Center in Florida. "You could also think of plants as pets. The crew just likes to nurture them."

The Veggie unit provides lighting and nutrient delivery, but uses the cabin environment on the space station for temperature control and as a source of carbon dioxide to promote growth.

This study will emphasize the focus on human habitability in space, since growing food in space may greatly improve long-duration spaceflight. Veggie can support a variety of studies used to determine how plants sense and respond to gravity. Astronauts will harvest the plants for further investigation. With continued plant growth studies aboard the space station using facilities like Veggie, crews may one day consume produce during long-term missions in low-Earth orbit or to an asteroid or Mars.

The Veggie unit's growth volume will be the largest volume available to date for plant growth on the space station, which will enable larger produce than was previously available, due to size restrictions. This improved understanding of plant growth and development in microgravity has important implications for improving plant growth and biomass production on Earth.

Continuing the important space station mission of Earth observation, the new High Definition Earth Viewing (HDEV) investigation places four commercially available high definition cameras on the exterior of the space station for use in streaming live video of Earth for online viewing. The cameras are enclosed in a temperature-specific case and exposed to the harsh radiation of the space environment.

Analysis of the effect of space on the video quality during the HDEV operational period may help engineers determine the best types of commercially available cameras to use on future missions. Using available products may be more cost-effective than designing new hardware.

High school students helped design some of the cameras' components for the HDEV mission, through the High Schools United with NASA to Create Hardware program (HUNCH). Student teams will operate the study by controlling the cameras and the images they stream.

The research does not end with the berthing of the Dragon. The capsule will be loaded with many samples and completed investigations and sent back to Earth after about a month-long stay at the space station. Some investigations will be enjoyed for years to come like the fresh veggies that one day will be grown in space for future crews to eat as they explore beyond Earth's orbit. 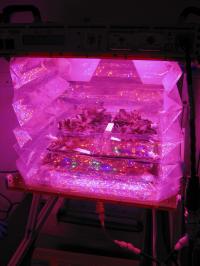