Vivid colors, flowing silk ribbons, and glittering bits of mirrors - the Vikings dressed with considerably more panache than we previously thought. The men were especially vain, and the women dressed provocatively, but with the advent of Christianity, fashions changed, according to Swedish archeologist Annika Larsson.

"They combined oriental features with Nordic styles. Their clothing was designed to be shown off indoors around the fire," says textile researcher Annika Larsson, whose research at Uppsala University presents a new picture of the Viking Age.

She has studied textile finds from the Lake MÃ¤laren Valley, the area that includes Stockholm and Uppsala and was one of the central regions in Scandinavia during the Viking Age. The findings, some of which were presented in her dissertation last year, show that what we call the Viking Age, the years from 750-1050 A.D., was not a uniform period. Through changes in the style of clothing we can see that medieval Christian fashions hit Sweden as early as the late 900s and that new trade routes came into use then as well. The oriental features in clothing disappeared when Christianity came and they started to trade with the Christian Byzantine and Western Europe.

"Textile research can tell us more about the state of society than research into traditions. Old rituals can live on long after society has changed, but when trade routes are cut off, there's an immediate impact on clothing fashions," says Annika Larsson.

She maintains that Swedish Viking women in the pre-Christian period probably dressed much more provocatively than we previously believed. She bases her theory on a new find uncovered in Russian Pskov, close to Novgorod and the eastward trade routes then plied from Sweden. The find consists of extensive remnants of a woman's attire, which Annika Larsson claims does not square with the traditional picture of how Viking women dressed.

Previously it was thought that Viking women wore a long suspender (brace) skirt, with both the front and back pieces consisting of square sections, held together by a belt. Clasps, often regarded as typical of the Viking Age, were attached to the suspenders roughly at the collar bone. Under this dress they wore a linen shift, and on top of it a woolen shawl or sweater.

"The grave plans from excavations at Birka outside Stockholm in the 19th century show that this is incorrect. The clasps were probably worn in the middle of each breast. Traditionally this has been explained by the clasps having fallen down as the corpse rotted. That sounds like a prudish interpretation," says Annika Larsson.

She maintains instead that the Birka women's skirts consisted of a single piece of fabric and were open in front. The suspenders held up the train and functioned as a harness that was fastened to the breasts with the clasps. Annika Larsson's theory is strengthened by that fact that a number of female figures have been preserved whose outfits both have trains and are open in front. But if we are to believe the archeological finds, this style of clothing disappeared with the advent of Christianity.

"It's easy to imagine that the Christian church had certain reservations about clothing that accentuated the breasts in this way and, what's more, exposed the under shift in front. It's also possible that this clothing was associated with pre-Christian rituals and was therefore forbidden," she believes.

Vikings did not dress the way we thought 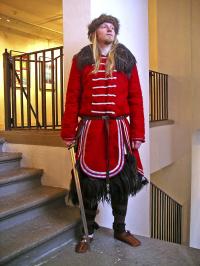