HOUSTON - (July 26, 2017) - Splitting water into hydrogen and oxygen to produce clean energy can be simplified with a single catalyst developed by scientists at Rice University and the University of Houston.

The electrolytic film produced at Rice and tested at Houston is a three-layer structure of nickel, graphene and a compound of iron, manganese and phosphorus. The foamy nickel gives the film a large surface, the conductive graphene protects the nickel from degrading and the metal phosphide carries out the reaction.

The robust material is the subject of a paper in Nano Energy.

Rice chemist Kenton Whitmire and Houston electrical and computer engineer Jiming Bao and their labs developed the film to overcome barriers that usually make a catalyst good for producing either oxygen or hydrogen, but not both simultaneously.

The discovery builds upon the researchers' creation of a simple oxygen-evolution catalyst revealed earlier this year. In that work, the team grew a catalyst directly on a semiconducting nanorod array that turned sunlight into energy for solar water splitting.

Electrocatalysis requires two catalysts, a cathode and an anode. When placed in water and charged, hydrogen will form at one electrode and oxygen at the other, and these gases are captured. But the process generally requires costly metals to operate as efficiently as the Rice team's catalyst.

"The standard for hydrogen evolution is platinum," Whitmire said. "We're using Earth-abundant materials -- iron, manganese and phosphorus -- as opposed to noble metals that are much more expensive."

The new catalyst also requires less energy, Whitmire said. "If you want to make hydrogen and oxygen, you have to put in energy, and the more you put in, the less commercially viable it is," he said. "You want to do it at the minimum amount of energy possible. That's a benefit of our material: The overpotential (the amount of energy required to trigger electrocatalysis) is small, and quite competitive with other materials. The lower you can get it, the closer you come to making it as efficient as possible for water splitting."

Graphene, the atom-thick form of carbon, is key to protecting the underlying nickel. One to three layers of graphene are formed on the nickel foam in a chemical vapor deposition (CVD) furnace, and the iron, manganese and phosphorus are added on top of that, also via CVD and from a single precursor.

Tests by Bao's lab compared nickel foam and the phosphide both with and without graphene in the middle and found the conductive graphene lowered charge-transfer resistance for both hydrogen and oxygen reactions.

"Nickel is one of the best catalysts to make graphene," said co-lead author Desmond Schipper, a Rice graduate student. "Essentially, we're using the nickel to help improve the nickel." He said the manganese adds a level of protection as well.

Whitmire said the material is scalable and should find use in industries that produce hydrogen and oxygen or by solar- and wind-powered facilities that can use electrocatalysis to store off-peak energy.

It may also be adapted to produce other advanced materials. "Our method could be widely applicable to a large number of metal phosphide materials for catalysts -- not just for water splitting, but for a range of things," he said.

"A critical factor is that we're able to make phase-pure materials with different compositions. Currently, people have very little control over the phase they get on a surface, and in many cases they get a mixture. When that happens, they don't know which phase is actually responsible for the catalysis. With our process, they can know."

Supporting the research were Rice University, the National Science Foundation (NSF) and the Robert A. Welch Foundation. Computing resources were provided by the University of Houston uHPC cluster, the NSF-supported Extreme Science and Engineering Discovery Environment and the Department of Energy Office of Science National Energy Research Scientific Computing Center.

This news release can be found online at http://news.rice.edu/2017/07/26/triple-layer-catalyst-does-double-duty/

http://news.rice.edu/files/2017/07/0731_ENERGY-1-WEB-1lf8s20.jpg
A catalyst developed by Rice University and the University of Houston splits water into hydrogen and oxygen without the need for expensive metals like platinum. This electron microscope image shows nickel foam coated with graphene and then the catalytic surface of iron, manganese and phosphorus. (Credit: Desmond Schipper/Rice University)

http://news.rice.edu/files/2017/07/0731_ENERGY-2-WEB-1a69fww.jpg
A catalyst developed by Rice University and the University of Houston splits water into hydrogen and oxygen without the need for expensive metals like platinum. This electron microscope image shows nickel foam coated with graphene and then the catalytic surface of iron, manganese and phosphorus. (Credit: Desmond Schipper/Rice University)

http://news.rice.edu/files/2017/07/0731_ENERGY-3-WEB-1e7x5sf.jpg
A catalyst developed by Rice University and the University of Houston splits water into hydrogen and oxygen without the need for expensive metals like platinum. This electron microscope image shows nickel foam coated with graphene and then the catalytic surface of iron, manganese and phosphorus. (Credit: Desmond Schipper/Rice University)

http://news.rice.edu/files/2017/07/0731_ENERGY-4-WEB-16k41be.jpg
A film of high-surface-area nickel foam coated with graphene and a compound of iron, manganese and phosphorus serve as a water-splitting catalyst that can produce hydrogen and oxygen simultaneously. The material was created at Rice University and tested at the University of Houston. (Credit: Jeff Fitlow/Rice University) 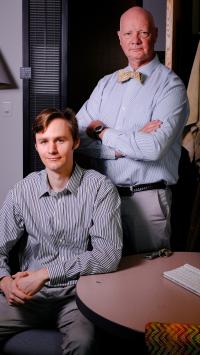