BETHESDA, MD (August 25, 2006) –Cooling water temperature during the fall prompts the crucian carp to store vast amounts of glycogen in its brain to keep the brain functioning and healthy from February to April, when there is no oxygen left in the ponds, a new study finds.

The study from Finland found that the amount of glycogen in the brain was at its peak in February, when the pond becomes nearly depleted of oxygen (anoxic). Glycogen, an energy supply that the carp brain uses to survive anoxia, was 15 times higher in February, compared to brain glycogen content in July, when oxygen in the pond is at its peak.

At the same time, the carp brain's sodium-potassium pump activity, a measure of energy demand, decreased 10-fold to its low point between February and April, said the study's lead author, Vesa Paajanen. Taken together, these findings indicate the carp extends the amount of time it can survive without oxygen in frigid water by 150-fold. Further, the study found that it was the dropping water temperature that sets these physiological changes into motion.

"This is the first study to show that sodium pump activity is controlled by water temperature, not by the amount of oxygen available in the water" Paajanen said. The findings help explain how the carp pulls off the remarkable physiological feat that allows its brain to survive for months in a nearly anoxic state.

There is currently no direct tie between these finding and humans. However, physiologists only recently realized the human brain contains glycogen, so who knows? Maybe this line of research will one day be important for humans to survive anoxia, Paajanen said.

The study, "Seasonal changes in glycogen content and Na-K-ATPase activity in the brain of the crucian carp," by Matti Vornanen and Vesa Paajanen of the University of Joensuu in Joensuu, Finland appears in the American Journal of Physiology-Regulatory, Integrative and Comparative Physiology. The American Physiological Society published the study.

The carp developed this remarkable physiological adaptation as a way to avoid troublesome neighbors: predators. But the predator-free ponds where they live are inhospitable and require the fish to survive several months in only a few feet of water covered by several feet of ice and snow.

The oxygen content of Finnish ponds drops dramatically when the ice and snow cover them, preventing diffusion of oxygen from the air and cutting off aquatic plants from the light needed for photosynthesis, Paajanen said. The ponds in Finland gradually lose oxygen following the summer, and from February to April the ponds have virtually no oxygen.

When crucian carp live in larger bodies of water such as lakes, they make another remarkable adaptation to avoid the mouths of predators: They shift shape to make themselves shorter and fatter, making it much more difficult for predators to get their jaws around them. In ponds, the fish elongate, but they move much less during the winter and don't eat at all. They may remain immobile for up to two minutes when removed from the cold water, Paajanen said.

To measure energy demand, Paajanen and Vornanen looked at sodium-potassium pump activity. The sodium pump is the body's chief way of keeping cell function in balance in the face of extreme conditions. The pump is necessary to transmit information among cells, including the neurons in the brain. The quieter the pumps, the less active and energy-consuming the brain is. However, if the pumps shut down, the cells die.

Glycogen, the form in which the body stores carbohydrates, is the energy supply that vital organs such as the heart and brain use to survive anoxia. "Glycogen is commonly found in the liver and in the muscles, but glycogen stores were generally believed to be minimal in the brain," Paajanen said.

In an earlier study, Paajanen and Vornanen found the carp stored extra glycogen in the heart during winter. In the current study, they hypothesized that the crucian carp brain has vast stores of glycogen, too, which it draws on when oxygen runs out.

The researchers spent 12 months gathering 20-30 carp each month from a fish trap they set in a nearby pond. They began the experiment in May 2002 and finished in June 2003, tracking water temperature and examining the brains of the fish shortly after removing them from the pond.

They found that as the water got colder in October and November, the carp began to consume less energy (sodium pump slows) and build up their glycogen (carbohydrate) stores, even though the water still had plenty of oxygen.

The study fund that glycogen and the sodium pump play equally important roles in carrying the fish through the anoxic period. The glycogen level that supports brain function for 16 hours in the anoxic winter when energy demand is low, would support the fish for only eight minutes in the summer with the same amount of oxygen. That is because energy demand rises as the water temperature rises, Paajanen noted.

Funding
The Academy of Finland provided a research grant for this work.

APS provides a wide range of research, educational and career support and programming to further the contributions of physiology to understanding the mechanisms of diseased and healthy states. In 2004, APS received the Presidential Award for Excellence in Science, Mathematics and Engineering Mentoring. 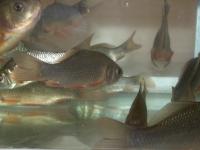