MBL, WOODS HOLE, MA-- Squid's colorful, changeable skin enables the animal--and their close relatives, cuttlefish and octopus--to display extraordinary camouflage, the speed and diversity of which is unmatched in the animal kingdom.

But how squid control their skin's iridescence, or light-reflecting property, which is responsible for the animal's sparkly rainbow of color, has been unknown.

In a new study, MBL (Marine Biological Laboratory) researchers Paloma Gonzalez Bellido and Trevor Wardill and their colleagues report that nerves in squid skin control the animal's spectrum of shimmering hues--from red to blue--as well as their speed of change. The work marks the first time neural control of iridescence in an invertebrate species has been demonstrated.

Squid skin is extraordinary because it has two ways to produce color and pattern. Pigmented organs called chromatophores create patterns with yellow, red, and brown colors. Underneath the pigments, iridophores, aggregations of iridescent cells in the skin, reflect light and add blue, green, and pink colors to the overall appearance of the skin. Collectively these two groups of skin elements can create spectacular optical illusions with patterns of color, brightness, and contrast change.

"For 20 years we have been wondering how the dynamically changeable iridescence is controlled by the squid," says study co-author Roger Hanlon. "At long last we have clean evidence that there are dedicated nerve fibers that turn on and tune the color and brightness of iridophores. It is not an exaggeration to call this "electric skin." The complex nerve network distributed throughout the squid's skin instantly coordinates tens of thousands of chromatophores with iridescent reflectors for rapidly changing behaviors ranging from camouflage to signaling."

Working with longfin inshore squid (Doryteuthis pealeii), the researchers took a new approach to investigating the mystery behind the iridophore control mechanism. By tracing a highly branched network of nerves and stimulating them electrically, they found that they could activate progressive color shifts from red and orange to yellow, green, and blue in just 15 seconds. The findings suggest that the specific color of each iridophore, as well as speed of change, is controlled by the nervous system, as is spatial chromatophore patterning that occurs in the skin layer just above.

How squid choose and hold particular skin colors to help camouflage themselves remains unknown and is particularly interesting because the animals are completely colorblind.

"One possibility is the animals do not care about the color of the iridophores, but shifting the color from red to blue will dramatically increase the relative brightness of iridophores," says Wardill. "This is because squid see predominantly blue light. Blue light is especially important in the ocean as it penetrates best into deeper water."

The study, co-authored by Gonzalez Bellido, Wardill, Hanlon of the MBL and Robyn Crook of University of Texas Medical School at Houston appeared in the August 15th issue of the journal Biological Sciences. The work was funded by grants from the Office of Naval Research (ONR), Defense Advanced Research Projects Agency (DARPA), and Air Force Office of Scientific Research.

The Marine Biological Laboratory (MBL) is dedicated to scientific discovery and improving the human condition through research and education in biology, biomedicine, and environmental science. Founded in 1888 in Woods Hole, Massachusetts, the MBL is an independent, nonprofit corporation. 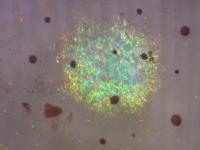