Human communication is powered by rules for combining words to generate novel meanings. Such syntactical rules have long been assumed to be unique humans. A new study, published in Nature Communications, show that Japanese great tits combine their calls using specific rules to communicate important compound messages. These results demonstrate that syntax is not unique to humans. Instead, syntax may be a general adaptation to social and behavioural complexity in communication systems.

Language is one of humans' most important defining characteristics. It allows us to generate innumerable expressions from a finite number of vocal elements and meanings, and underlies the evolution of other characteristic human behaviours, such as art and technology. The power of language lies in combining meaningless sounds into words that in turn are combined into phrases. Research on the communication systems of non-human primates and birds suggests that the ability to combine meaningless vocal elements has evolved repeatedly, but the evolution of syntax (i.e. combining different words to form more complex expressions) was so far considered to be unique to human language.

A recent study by researchers from Japan, Germany and Sweden challenges this view, demonstrating that the Japanese great tit, known for its diverse vocal repertoire, have evolved syntax. This small bird species experiences a number of threats, and in response to predators, they give a variety of different calls. These calls can be used either alone or in combination with other calls. Using playback experiments, Dr. Suzuki and colleagues could demonstrate that ABC calls signifies "scan for danger", for example when encountering a perched predator, whereas D calls signify "come here", for example when discovering a new food source, or to recruit the partner to their nest box. Tits often combine these two calls into ABC-D calls such as when approaching and deterring predators. When these two calls are played together in the naturally occurring order (ABC-D), then birds both approach and scan for danger. However, when the call ordering is artificially reversed (D-ABC), birds do not respond.

'This study demonstrates that syntax is not unique to human language, but also evolved independently in birds. Understanding why syntax has evolved in tits can give insights into its evolution in humans', says David Wheatcroft, post doc at the Department of Ecology and Genetics at Uppsala University and co-author of the study.

Japanese great tits use different calls to coordinate a variety of social interactions, each of which requires specific behavioural responses. Syntax provides rules for combining the elements from a small vocabulary to generate novel meanings that can be readily recognized. These rules may be an adaptation to social and behavioural complexity in communication systems, such as in human language.

Syntax is not unique to human language 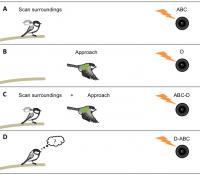 A Variety of Different Calls

Call for 'Approach and Scan for Danger'