Mecysmaucheniidae spiders, which live only in New Zealand and southern South America, don't look like much. They are drab and tiny spiders that hunt for prey on the ground. But researchers reporting in the Cell Press journal Current Biology on April 7 show that these spiders actually have a remarkable ability to strike their prey with lightning speed.

This high-speed, power-amplified strike has evolved at least four different times within the Mecysmaucheniid family of spiders, the researchers have found.

"This research shows how little we know about spiders and how much there is still to discover," says Hannah Wood of the Smithsonian Institution's National Museum of Natural History. "The high-speed predatory attacks of these spiders were previously unknown. Many of the species I have been working with are also unknown to scientific community."

Unlike many young children, Wood always liked spiders. She also loved to travel to far-flung places around the world to study them. After her first encounter with a trap-jaw spider in Chile, she noticed that they would sit with their jaw-like chelicerae open and ready to snap. She started recording them.

At the time, Wood was a grad student. She says she began keeping about 100 of the spiders in her tiny apartment at any given time. She recorded their activities on a little CCD camera with a large macro lens, and then started using high-speed cameras.

Her high-speed video recordings showed that when a tasty insect comes close, the spiders snap their chelicerae shut with incredible power and speed. That kind of predatory behavior had been seen before in some ants, but it was unknown in arachnids, the group including spiders.

As the new report shows, high-speed videos of 14 species of Mecysmaucheniid spiders revealed a great range of cheliceral closing speeds. The fastest species snaps its chelicerae more than two orders of magnitude faster than the slowest species.

The power output from four of the spider species exceeded the known power output of muscles, the researchers found. In other words, they explain, the spiders' movements can't be directly powered by the spiders' tiny muscles, particularly given the short times and small distances covered during a strike.

That means other structural mechanisms must allow the spiders to store energy to produce their ballistic movements. The researchers have already described some anatomical differences in the power-amplified trap-jaw spiders. However, Wood says they aren't quite sure how it works and are now conducting further investigations designed to find out.

In addition to providing new insights into spiders and their evolution, the new findings may also have broader implications.

"Studying these spiders could allow humans to design robots that move in novel ways that are based on how these spiders move," Wood says.

Funding for this project came from the National Science Foundation. Support for fieldwork came from the Lindsay Expedition, Exline-Frizzell Funds at California Academy of Sciences, and the Schlinger Foundation.

These trap-jaw spiders strike their prey with lightning speed 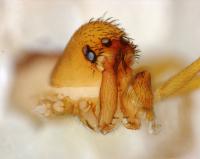