It might be cold in the Antarctic, but that doesn't mean that life there necessarily moves slowly. A report appearing in Current Biology, a Cell Press publication, on July 11 reveals the discovery of a surprisingly fast-growing community of glass sponges in an area formerly covered by permanent ice. With the ice at the surface disappearing, those little-known sponges are launching a seafloor takeover.

That's a surprise, given that glass sponges were thought to have very long and slow lives, the researchers say. The boldest estimates suggest lifetimes of more than 10,000 years.

"By comparing identical tracks video-surveyed by remotely operated underwater vehicle in one of the least accessible parts of the Antarctic, we found two- and three-fold increases in the biomass and abundance of glass sponges, respectively, from 2007 to 2011," says Claudio Richter of the Alfred Wegener Institute in Germany. "This is much faster than any of us would have thought possible."

"A general principle to be learned from our study is that benthic communities are very dynamic, even under the extreme environmental conditions prevailing in the Antarctic," says the study's first author, Laura Fillinger. "Only four years ago, the study area was dominated by a species of sea squirt. Now this pioneer species has all but disappeared, giving way to a community dominated by young individuals of a glass sponge."

Richter and Fillinger plan to keep going back to this polar site, to see what might happen next. They suspect the seafloor there will ultimately reach a climax community that looks like those in other shallow and seasonally ice-covered Antarctic waters; at this rate, that could happen within decades, not centuries.

Exactly what this will mean for the rest of the Antarctic or the planet is impossible to say. Glass sponges serve as important habitat for diverse communities of fish and invertebrates, but there is still a lot that no one really knows about them.

Ultimately, the future is anyone's guess. If you are a glass sponge, it does appear to be good news. "If the alarming rate of ice shelf disintegration continues… glass sponges may find themselves on the winners' side of climate change," the researchers write. 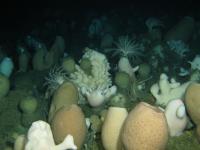 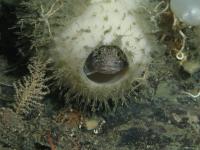