Biologists Leonard Freed and Rebecca Cann from the University of Hawaii at Manoa have been studying birds at Hakalau Forest National Wildlife Refuge for 20 years. Located on an old cattle ranch on the windward slope of Mauna Kea on the Island of Hawaii, it was established in 1985 to protect 8 species of rare and endangered perching birds. The refuge and its volunteers planted over 400,000 seedlings of native koa trees in an abandoned pasture to restore high elevation forest. The once-rare white-eye colonized the restoration area, grew rapidly in it, but then surged into the old-growth forest below. Freed and Cann estimated that tens of thousands of native birds were lost. Their study was recently published in the open access journal NeoBiota.

The researchers had previously shown competition between white-eyes and native birds on their study sites. With increased numbers of white-eyes, young of all native species measured had stunted growth, indicating that food was becoming a problem. They also documented that birds of all ages had difficulty replacing their feathers. Each problem, both unprecedented in nature, occurred at the same time. In contrast to the forest adjacent to the restoration area, native birds deeper within the forest had normal growth and feather replacement where white-eyes were still rare.

Freed and Cann then used the refuge's own survey data collected over 3,373 ha of open forest and 1,998 ha of closed forest to determine if changes observed on their study sites were a general problem on the entire refuge. They documented a stepwise increase in density of white-eyes in the open forest area that had been sustained for 8 years between 2000 and 2007, and a more gradual increase in the closed forest area below that.

Loss of native birds followed the refuge-wide surge of white-eyes. Greater declines occurred in the open forest area where white-eyes increased first, amounting to a drop of one-third of native birds. About 10% of birds disappeared from the closed forest area, but there was strong correlation among losses of native species in the two areas. The researchers expect that losses in the more pristine closed forest area will continue, because the white-eye is still increasing there. Ironically, only an alien species is increasing on a refuge set aside to protect native Hawaiian birds. Forest restoration has precipitated a problem that requires additional action in the forest below. Hawaiian birds are considered to be "conservation reliant" species from other threats. Now the future of native birds on the refuge requires control of an introduced bird.

An introduced bird competitor tips the balance against Hawaiian species 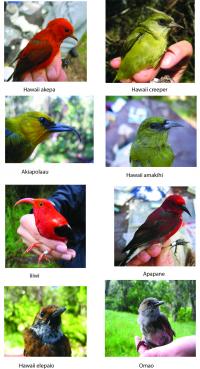