The first scientific description of a newly discovered species is normally based on one specimen, designated the "holotype" for that species, plus a few extra ones called paratypes. These individual animals - sometimes rare or unique specimens - are usually under the curatorial care of museums, which is clearly necessary but also makes it difficult for other researchers to study them firsthand.

Traditionally, taxonomic descriptions have relied on drawings and photographs to record and distribute anatomical information that distinguishes different species. Modern 3D imaging technology - particularly X-ray microtomography (microCT) - provides not only a third dimension to the pictures, but also the means for sharing the information widely.

The digital simulacrum of a physical holotype or paratype specimen is known as a cybertype: like an avatar in a computer game (or a blockbuster movie), the cybertype allows the museum specimen to enter the world of web-based biodiversity research.

This week, Dr. Nesrine Akkari (NHMW Vienna) and colleagues in Copenhagen and Vienna have published a cybertype-enhanced description of a new millipede from Spain, dubbed Ommatoiulus avatar in recognition of its digital alter ego. This is the first new species to be described with the aid of detailed 3D images of the actual type specimens and to be published with its cybertypes as an open-access resource. "The use of virtual specimens demonstrates how much useful scientific data can be obtained without dissecting the original specimen, which is often unavoidable in studying millipede genitalia," said Dr. Akkari. "At the same time it allows a general overview of the different anatomical structures and their natural position in unprecedented way."

Millipedes are turning out to be far more diverse worldwide than previously thought, with many species native to local environments like Andalusia, the home of O. avatar. The published 3D images have microscopic detail, with resolutions of a few micrometers, and can therefore be studied in place of the actual specimens by anyone in the world. Pictures, movies, and 3D image data of the cybertypes are available free at the Dryad digital repository, while the real holotype and paratype millipedes are safely ensconced in the Natural History Museums of Vienna and Denmark. "These cybertypes are highly accurate 3D representations of the anatomy of the physical specimen, and they can be studied and repurposed by anyone," said Brian Metscher, head of the microCT imaging lab in the University of Vienna's Theoretical Biology Department.

"This species description is an example of how the practice of taxonomic science need no longer be seen as old fashioned, but as a discipline that reflects the ways that knowledge is produced, shared, and used in our modern era," said Dr. Akkari, who has also created interactive taxonomic digital keys for identifying millipede species. "Avatars will not replace the actual types but will certainly add great value to Natural History Museums collections, especially of fragile and unique specimens."

Professor Henrik Enghoff from the Natural History Museum of Denmark, emphasizes the enormity of the task facing taxonomists: "Almost two million species of living organisms have been scientifically described, but several times this number remain unknown to science. Each species has unique traits and plays a unique role in Nature, and if we want to know how Nature functions, we need to know the players in the game - that is, the species. By applying microCT to the taxonomic process of discovering, recognizing, and describing species we can do a much better job than before. The cybertype of our millipede, Ommatoiulus avatar, is so far a lone forerunner, but more will surely follow."

Publication in PLOS ONE: 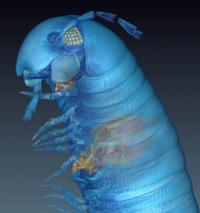