Scripps Institution of Oceanography, UC San Diego, paleoceanographer Richard Norris is one of 41 scientists presenting evidence that an asteroid impact really did kill off dinosaurs and myriad other organisms 30 years after the theory was first proposed.

The researchers are authors of a review paper being released Friday in the journal Science that represents a new salvo in an ongoing controversy over the cause of the mass extinction. Norris' contribution to the paper was evidence in seafloor sediment records that indicate how deep-sea life was profoundly reshaped by the impact.

"The story is a lot stronger now than 30 years ago, when it was admittedly a little more speculative," said Norris. "Since 1980, we have accumulated an overwhelming amount of evidence that there was an impact. We also think the evidence is overwhelming that there was a mass extinction as a direct result of this event."

In that year, father and son researchers Luis and Walter Alvarez first proposed the notion that an asteroid impact killed off the dinosaurs. They had discovered that high levels of iridium, an element rare on Earth but common on extraterrestrial objects like meteors, were uniformly present in sedimentary samples that could be dated back to the extinction event, which marked the transition between two geologic periods.

At the time, they did not know where on Earth that impact might have taken place. It would be another 11 years before researchers Alan Hildebrand and Glen Penfield suggested that a crater left behind by an asteroid impact was buried on the Yucatan peninsula. With the crater nearly 200 kilometers (125 miles) in diameter, the impact was one large enough to have caused the mass extinction in agreement with the Alvarez hypothesis.

The force of the impact itself — there is evidence of giant earthquakes and tsunami waves more than 1,000 feet tall being generated in the immediate aftermath — and the following profound atmospheric changes combined to make the planet uninhabitable for between 40 and 70 percent of all life forms on Earth.

But rival explanations, though outside the mainstream, have continued to proliferate in high-profile fashion. One theory that has gained widespread attention attributes the mass extinction to a volcanic event in India that took place at roughly the same time as the impact. Another faction of researchers acknowledges that the asteroid did strike but that its effects were not enough to cause the mass extinction.

Norris notes that an inspection of ancient layers of seafloor sediment around the world show a clear record of the event contained in a red or green band composed of materials ejected from the blast. These include pieces of rock like those on the Yucatan, glassy droplets that represent melted rock, microscopic diamonds made under the very high pressures produced by the impact and meteoric debris.

"There are also monster submarine landslides along the entire East Coast of the U.S. from the massive earthquake triggered by the impact," he said.

Norris points to several pieces of evidence from the deep sea that support a tight link between the impact and the mass extinction. In most places in the deep ocean, the impact debris layer is associated with an abrupt decrease in the size of fossils — the appearance of a dwarfed "disaster" fauna. Abrupt environmental changes throughout history such as the impact tend to favor smaller organisms that have more rapid lifecycles and fewer resource needs than larger organisms. Biological productivity plummets in many parts of the oceans immediately after the impact. The drop in productivity is partly reflected by a change in the color of deep-sea sediments — from creamy white to brown or grey — as light-colored fossil shells abruptly decreased in number.

Individually, the decrease in fossil size, the appearance of a "disaster fauna" and the plummet in ocean productivity are unusual, and together with an impact debris layer, are unique in the deep-sea sediment record.

30 years later, what killed the dinosaurs is revisited 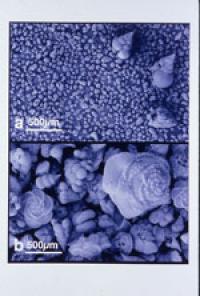