University Park, Pa. -- Manipulating tiny objects like single cells or nanosized beads often requires relatively large, unwieldy equipment, but now a system that uses sound as a tiny tweezers can be small enough to place on a chip, according to Penn State engineers.

"Current methods for moving individual cells or tiny beads include such devices as optical tweezers, which require a lot of energy and could damage or even kill live cells," said Tony Jun Huang, assistant professor of engineering science and mechanics. "Acoustic tweezers are much smaller than optical tweezers and use 500,000 times less energy."

While optical tweezers are large and expensive, acoustic tweezers are smaller than a dime, small enough to fabricate on a chip using standard chip manufacturing techniques. They can also manipulate live cells without damaging or killing them.

Acoustic tweezers differ from eyebrow tweezers in that they position many tiny objects simultaneously and place them equidistant from each other in either parallel lines or on a grid. The grid configuration is probably the most useful for biological applications where researchers can place stem cells on a grid for testing or skin cells on a grid to grow new skin. This allows investigators to see how any type of cell grows.

"Acoustic tweezers are not just useful in biology," said Huang. "They can be used in physics, chemistry and materials science to create patterns of nanoparticles for coatings or to etch surfaces."

Acoustic tweezers work by setting up a standing surface acoustic wave. If two sound sources are placed opposite each other and each emits the same wavelength of sound, there will be a location where the opposing sounds cancel each other. This location can be considered a trough. Because sound waves have pressure, they can push very small objects, so a cell or nanoparticle will move with the sound wave until it reaches the trough where there is no longer movement. The particle or cell will stop and "fall" into the trough.

The acoustic tweezers are manufactured by fabricating an interdigital transducer onto a piezoelectric chip surface. These transducers are the source of the sound. Next, using standard photolithography, microchannels are fabricated in which a small amount of liquid with the cells or particles can move around freely. These microchannels were bonded to the chip to create the area for particle movement.

"The results verify the versatility of our technique as the two groups of cells differ significantly in both shape (spherical beads vs. rod-shaped E. coli) and size," the researchers reported in a recent issue of Lab on a Chip. They note that the patterning performance is independent of the particle's electrical, magnetic and optical properties.

Acoustic tweezers technology has significant advantages over existing technologies because of its versatility, miniaturization, power consumption and technical simplicity. Huang expects it to become a powerful tool for many applications such as tissue engineering, cell studies, and drug screening and discovery. 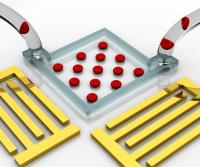 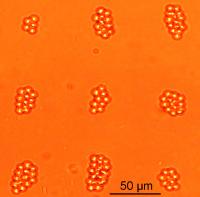