TEMPE, Ariz. - As the search continues for Earth-size planets orbiting at just the right distance from their star, a region termed the habitable zone, the number of potentially life-supporting planets grows. In two decades we have progressed from having no extrasolar planets to having too many to search. Narrowing the list of hopefuls requires looking at extrasolar planets in a new way. Applying a nuanced approach that couples astronomy and geophysics, Arizona State University researchers report that from that long list we can cross off cosmic neighbor Tau Ceti.

The Tau Ceti system, popularized in several fictional works, including Star Trek, has long been used in science fiction, and even popular news, as a very likely place to have life due to its proximity to Earth and the star's sun-like characteristics. Since December 2012 Tau Ceti has become even more appealing, thanks to evidence of possibly five planets orbiting it, with two of these - Tau Ceti e and f - potentially residing in the habitable zone.

Using the chemical composition of Tau Ceti, the ASU team modeled the star's evolution and calculated its habitable zone. Although their data confirms that two planets (e and f) may be in the habitable zone it doesn't mean life flourishes or even exists there.

"Planet e is in the habitable zone only if we make very generous assumptions. Planet f initially looks more promising, but modeling the evolution of the star makes it seem probable that it has only moved into the habitable zone recently as Tau Ceti has gotten more luminous over the course of its life," explains astrophysicist Michael Pagano, ASU postdoctoral researcher and lead author of the paper appearing in the Astrophysical Journal. The collaboration also included ASU astrophysicists Patrick Young and Amanda Truitt and mineral physicist Sang-Heon (Dan) Shim.

According to Pagano, he and his collaborators didn't pick Tau Ceti "hoping, wanting, or thinking" it would be a good candidate to look for life, but for the idea that these might be truly alien new worlds.

Tau Ceti has a highly unusual composition with respect to its ratio of magnesium and silicon, which are two of the most important rock forming minerals on Earth. The ratio of magnesium to silicon in Tau Ceti is 1.78, which is about 70% more than our sun.

The astrophysicists looked at the data and asked, "What does this mean for the planets?"

Building on the strengths of ASU's School of Earth and Space Exploration, which unites earth and space scientists in an effort to tackle research questions through a holistic approach, Shim was brought on board for his mineral expertise to provide insights into the possible nature of the planets themselves.

"With such a high magnesium and silicon ratio it is possible that the mineralogical make-up of planets around Tau Ceti could be significantly different from that of Earth. Tau Ceti's planets could very well be dominated by the mineral olivine at shallow parts of the mantle and have lower mantles dominated by ferropericlase," explains Shim.

Considering that ferropericlase is much less viscous, or resistant to flowing, hot, yet solid, mantle rock would flow more easily, possibly having profound effects on volcanism and tectonics at the planetary surface, processes which have a significant impact on the habitability of Earth.

"This is a reminder that geological processes are fundamental in understanding the habitability of planets," Shim adds.

"Tau Ceti has been a popular destination for science fiction writers and everyone's imagination as somewhere there could possibly be life, but even though life around Tau Ceti may be unlikely, it should not be seen as a letdown, but should invigorate our minds to consider what exotic planets likely orbit the star, and the new and unusual planets that may exist in this vast universe," says Pagano.

This work was supported by funding from the NASA Astrobiology Institute and NASA Nexus for Exoplanet System Science.

Image 1 caption: How would an alien world like this look? That's the question that undergraduate art major Joshua Gonzalez attempted to answer. He worked with Professor Patrick Young's group to learn how to analyze stellar spectra to find chemical abundances, and inspired by the scientific results, he created two digital paintings of possible unusual extrasolar planets, one being Tau Ceti for his Barrett Honors Thesis. Credit: Joshua Gonzalez

Image 2 caption: An artist's impression of the Tau Ceti system. Credit: J. Pinfield for the RoPACS network at the University of Hertfordshire, 2012

Tau Ceti: The next Earth? Probably not 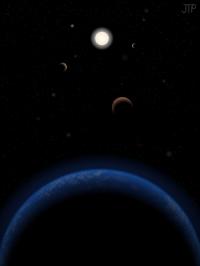