A new ultra-bright source of X-rays has awakened in between our galactic neighbours the Magellanic Clouds, after a 26-year slumber. This is the second-closest such object known to date, with a brightness greater than a million Suns. The discovery is published in the journal Monthly Notices of the Royal Astronomical Society.

The object, known as RX J0209.6-7427, was first detected during a 6-month long outburst in 1993. Though it was initially identified as a Be-type X-ray binary, its true nature remained a mystery as it lingered in a dormant state for the next 26 years, only flaring up again in November last year.

Now, a team of Indian scientists have used AstroSat, India's first dedicated space observatory, to reveal the extreme nature of the source, and have detected broad-energy X-ray pulsations in the object for the first time. This classifies it as a type of object known as an ultra-luminous X-ray pulsar (ULXP).

The pulsar is located in the Magellanic Bridge, a stream of gas and stars linking the Magellanic Clouds. These are two of our nearest galactic companions, and some of the most distant objects visible to the naked eye. The new X-ray source is the second-closest ULXP known to date, after a 2018 discovery in our own Milky Way galaxy, and is only the eighth such object ever discovered.

Ultra-luminous X-ray sources are observable as single points in the sky, but with brightnesses comparable to entire galaxies. "The conventional theory is that in order to shine so brightly, ULXPs must be glowing accretion discs around black holes," said Amar Deo Chandra, lead author on the new study. "However, recent discoveries of pulsations in these objects suggest that they may in fact have neutron stars at their heart."

A neutron star is the remnant of a dead star which contains as much matter as our Sun, but is compressed into a tiny radius of as little as 10km - the size of a small city. The neutron star in this object is thought to be spinning as rapidly as 100 times per second, and emits pulses of energetic X-rays from its magnetic poles, leading to the new 'X-ray pulsar' classification.

The group of astronomers, from IISER Kolkata, IUCAA Pune and the Center for Excellence in Basic Sciences (UM-DAE CEBS) Mumbai, have also found that the pulsar may even be speeding up, setting off bright X-ray 'fireworks'. This is thought to happen when the neutron star captures material from a companion star, injecting energy into the system and speeding up the rotation.

The scarcity of similar sources makes detecting and studying new ULXPs essential for X-ray astronomers seeking to understand the Universe.

"This is only the eighth ULXP detected so far, and the first one near the Magellanic Clouds," Chandra adds. "It raises the interesting possibility that a significant fraction of ultra-luminous X-ray sources may really be neutron stars accreting at super Eddington rates, rather than black holes as previously thought." 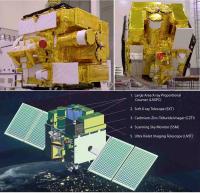