An international study led by researchers from the Institute of Space Sciences, from the Spanish National Research Council (CSIC) and the Institut d'Estudis Espacials de Catalunya has discovered that carbonaceous chondrites, a class of meteorites, incorporated hydrated minerals along with organic material from the protoplanetary disk before the formation of planets. Scientists from the study published in the journal Space Science Reviews note that these meteorites played "an important role in the primordial Earth's water enrichment" because they facilitated the transportation of volatile elements that were accumulated on the external regions of the so-called protoplanetary disk from which planets were formed more than 4.500 years ago. Earth was formed in an environment close to the Sun, very much reduced due to the relative lack of oxygen.

Carbonaceous chondrites come from asteroidal bodies that due to their size, generally inferior to hundred kilometres, never melted, and neither suffered internal chemical differentiation as planets did. Thus, the study gives clues about the initial accretion phases of the first bodies that formed the planets. The meteorites analysed in this work belong to the NASA's Antartic collection, whose CSIC's Institute of Space Sciences is the only repository Spanish centre, and the meteorites that fell in Murchison (Australia) in 1969 and in Renazzo (Italy) in 1824. Representative samples of the two more-hydrated types of carbonaceous chondrites (CM and CR groups) have been studied.

"Chondrites constitute a fossil legacy of the creation of the planetesimals, which provide information about the accretion of the first building blocks of planets, and also about everything that happened inside them shortly after their formation. In this study, we want to go a step further to identify processes of water incorporation befallen in the same protoplanetary disk", explains CSIC researcher Josep M. Trigo-Rodríguez, who works at the Institute of Space Sciences and has led the study.

CSIC researcher adds: "There is a great debate about the origin of water in Earth and our study proves that carbonaceous chondrites were able to transport water in a very efficient way in their matrices. That water seems to come from two types of objects formed at different distances from the Sun: hydrated asteroids and comets. Obviously, in order to know the origin of water in Earth, we must study not only the comets but also the carbonaceous chondrites that come from an asteroid population called transitional. These bodies were far more numerous 4.000 millions of years ago, but suffered a gravitational destabilisation during Jupiter and Saturn's migration to its current location. Those that did not end being swallowed by Jupiter and Saturn were rejected towards the terrestrial planets and to other regions of the Solar System, transporting water and organic material inside them", explains the CSIC researcher.

The study also points at the direct implications for the origin of water in Earth. "Our calculations indicate that, coinciding with the so-called 'Heavy Bombardment' produced by the gravitational destabilisation of the main asteroid belt, billions of tons of carbonaceous chondrites reached Earth about 3.800 years ago. And they did it transporting in their fine matrices water and other volatile elements in form of hydrated minerals", says Trigo.

In this study have participated Safoura Tanbakouei and Victoria Cabedo from the Institute of Space Sciences; Albert Rimola from the Universitat Autònoma de Barcelona; and Martin Lee from the University of Glasgow (Scotland).

Currently, there are two ongoing missions for sample return from primitive asteroids: NASA's OSIRIS-Rex and JAXA's (Japan Aerospace Exploration Agency) Hayabusa 2. The results from the carbonaceous chondrites' analysis at a micro- and nanoscale that are published in this new study reveal the importance of the sample-return missions, that can bring to Earth rocks less altered by collisions than the meteorites that land on the terrestrial surface.

Carbonaceous chondrites provide clues about the delivery of water to Earth 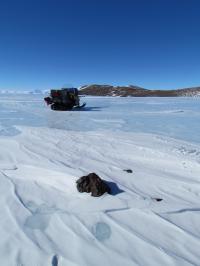