Unfortunately, when ancient kings sent letters to each other, their post offices didn't record the sender's return address. It takes quite a bit of super-sleuthing by today's archaeologists to determine the geographical origin of this correspondence — which can reveal a great deal about ancient rulers and civilizations.

Now, by adapting an off-the-shelf portable x-ray lab tool that analyzes the composition of chemicals, Prof. Yuval Goren of Tel Aviv University's Department of Archaeology and Ancient Near Eastern Civilizations can reveal hidden information about a tablet's composition without damaging the precious ancient find itself. These x-rays reveal the soil and clay composition of a tablet or artefact, to help determine its precise origin.

But Prof. Goren's process, based on x-ray fluorescence (XRF) spectrometry, can go much further. Over the years, he has collected extensive data through physical "destructive" sampling of artefacts. By comparing this data to readouts produced by the XRF device, he's built a table of results so that he can now scan a tablet –– touching the surface of it gently with the machine ― and immediately assess its clay type and the geographical origin of its minerals.

The tool, he says, can also be applied to coins, ancient plasters, and glass, and can be used on site or in a lab. He plans to make this information widely available to other archaeological researchers.

Preserving artefacts for the future

Prof. Goren's field intersects the worlds of geology, mineralogy and ancient technology as he tries to understand where ancient tablets and pots are made, based on the crystals and minerals found in the materials of these artefacts.

Traditionally archaeological scientists have had to take small samples of an artefact –– a chip or a slice –– in order to analyze its soil and clay composition. But as more and more museums and archaeology sites ban these destructive means of investigating archaeological finds, Prof. Goren's new tool may help save archaeological structures while solving some of its deepest mysteries.

"It's become a big ethical question," says Prof. Goren. "Many museums will not allow any more physical sampling of artefacts, and it's especially problematic for small tablet fragments and stamps which cannot be broken in the process. I had to find another way to know what these artefacts were made of."

Records from a Jesubite King

In his recent study published in the Israel Exploration Journal, Prof. Goren and his colleagues investigated a Late Bronze Age letter written in the Akkadian language and found among the Ophel excavations in Jerusalem.

Its style suggests that it is a rough and contemporary tablet of the Amarna letters –– letters written from officials throughout the Middle East to the Pharaohs in Egypt around 3,500 years ago, pre-biblical times. Using his device, Prof. Goren was able to determine that the letter is made from raw material typical to the Terra Rossa soils of the Central Hill Country around Jerusalem. This determination helped to confirm both the origin of the letter and possibly its sender.

"We believe this is a local product written by Jerusalem scribes, made of locally available soil. Found close to an acropolis, it is also likely that the letter fragment does in fact come from a king of Jerusalem," the researchers reported, adding that it may well be an archival copy of a letter from King Abdi-Heba, a Jesubite king in Jerusalem, to the Pharaoh in nearby Egypt.

Prof. Goren is also an expert at uncovering archaeological forgeries and has worked on the alleged ossuary, or bone box, of Jesus' brother James.

American Friends of Tel Aviv University (www.aftau.org) supports Israel's leading and most comprehensive and most sought-after center of higher learning. Ranked #114 in the world in independent rankings, TAU's innovations and discoveries are cited more often by the global scientific community than all but 20 other universities worldwide.

Internationally recognized for the scope and groundbreaking nature of its research programs, Tel Aviv University consistently produces work with profound implications for the future. 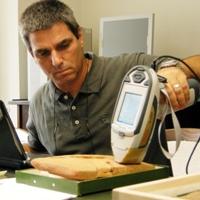