Hydra is a genus of tiny freshwater animals that catch and sting prey using a ring of tentacles. But before a hydra can eat, it has to rip its own skin apart just to open its mouth. Scientists reporting March 8 in Biophysical Journal now illustrate the biomechanics of this process for the first time and find that a hydra's cells stretch to split apart in a dramatic deformation.

Picture a creature less than half an inch long that looks like a column with a ring of tentacles at one end. The other end adheres to a rock or other surface, sticking the hydra in place while it waits for unsuspecting prey to swim by. When a live animal--a small shrimp, perhaps--brushes against its tentacles, the hydra shoots out poisoned barbs to sting and paralyze its prey. Then the hydra contracts its tentacles, a special group of cells splits apart to display a black maw, and it sucks the prey in. Once the meal is digested, the hydra rips open its mouth to spit out any leftover materials, seals it back up into a continuous sheet of tissue, and waits for the next shrimp to swim by.

The basic process, along with the chemical triggers that induce it, had already been well-characterized, says senior author Eva-Maria Collins, a biophysicist at the University of California, San Diego, but nobody had looked closely at how Hydra's mouth opening actually worked. Collins and her team were inspired to investigate the mechanism while studying the regeneration abilities of a species called Hydra vulgaris. Her lab uses Hydra genetically engineered to light up the animals' two tissue layers, which allowed the researchers to observe the hydras' feeding process on a cellular level.

The research team showed that a hydra's cells change their shape, rather than move around, when the mouth opens. "We can try to understand what look like very complicated processes in the living animal with relatively simple physics," Collins says. Once triggered, radially oriented fibers in the tissue contract to stretch the cells apart, similar to how muscles in the iris contract to open our pupils. When the researchers added magnesium chloride to act as a muscle relaxant, the hydras couldn't open their mouths at all.

"The fact that the cells are able to stretch to accommodate the mouth opening, which is sometimes wider than the body, was really astounding," says Collins. "When you watch the shapes of the cells, it looks like even the cell nuclei are deformed."

Hydra seem to be special in this case. "Evolutionarily, why do these animals have this weird mechanism for feeding? We don't really have an answer for that," says Collins, "but it's a really interesting question." Her team is currently investigating what physiological consequences this shape-changing might have for Hydra's cells.

The Biophysical Journal (@BiophysJ), published by Cell Press for the Biophysical Society, is a bimonthly journal that publishes original articles, letters, and reviews on the most important developments in modern biophysics--a broad and rapidly advancing field encompassing the study of biological structures and focusing on mechanisms at the molecular, cellular, and systems level through the concepts and methods of physics, chemistry, mathematics, engineering, and computational science. Learn more at: http://www.cell.com/biophysj/home To receive Cell Press media alerts, contact press@cell.com.

Inside the mouth of a hydra 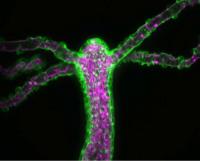 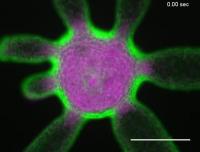