A group of researchers at Instituto de Medicina Molecular (iMM) Lisboa has revealed the mechanism by which cellular nuclei reach their position within muscle cells. This discovery, now published in Nature Cell Biology, can have important implications in therapeutic strategies to treat muscular diseases.

Muscular diseases can range from genetic disorders to aging muscles. Muscle loss affects the entire segment of the aged population. This increases the risk of severe mobility limitations, hospitalization and mortality. These numbers will all be inflated by the growing aging population. It is estimated that by 2050 the world's population above 60 year's old will double reaching around 2 billion world-wide. This generalized aging poses a series of challenges for society.

A hallmark of muscle cells is the unique position of their nuclei at the cellular periphery. In multiple muscle diseases, this nuclear positioning fails to occur. Although the severity of symptoms varies amongst affected individuals, these diseases result in a gradual loss of muscle function that leads to a loss of autonomy.

The team led by Edgar Gomes studies nuclear positioning during muscle formation, in particular how nuclei move from an initial central position to the periphery of muscle cells.

"Throughout my PhD I heard scientists commenting on nuclear positioning as an indicator for muscle diseases without knowing how nuclei are positioned. It was therefore exhilarating to uncover how this process occurred; now we have to understand why", said the study's first author William Roman.

Researchers devised a unique protocol that allowed them to design a theoretical model to explain this natural phenomenon. The model was then tested in the laboratory and lead to the identification of the forces involved in nuclear movement at a molecular level.

"It was fascinating to observe for the first time how nuclei are positioned at the periphery of the muscle fibers. We expect that this discovery will be important to develop novel treatments for different muscle disorders and for sport-induced muscle injuries", said Edgar Gomes.

This work, which also involved teams at the Crick Institute in London, and Center for Research in Myology in Paris, identifies both the mechanism and the molecular pathways involved in nuclear positioning in muscle. Since nuclear positioning is disrupted in most muscle disorders, these discoveries can become targets for novel therapeutic strategies.

In the future, this work can be basis for the identification of optimal physical exercises to preserve and repair muscle capacity. Formulating workout strategies not only for aging population but also for athletes would promote a healthier lifestyle.

Muscle nuclei: May the force be with you 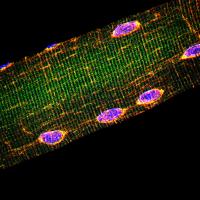