Glow-in-the-dark paints that have improved flexibility and transparency while also being cheaper and easier to manufacture are on the horizon courtesy of new research from Kyushu University. In a groundbreaking demonstration, light emission lasting more than one hour was achieved from organic materials, which are also promising for unlocking new applications such as in bio-imaging.

Based on a process called persistent luminescence, glow-in-the-dark materials work by slowly releasing energy absorbed from ambient light. Used in watches and emergency signs, commercial glow-in-the-dark materials are based on inorganic compounds and include rare metals such as europium and dysprosium. However, these materials are expensive, require high temperatures to manufacture, and scatter light--as opposed to being transparent--when ground into powders for paints.

Carbon-based organic materials--similar to those used in plastics and pigments--can overcome many of these disadvantages. They can be excellent emitters and are already widely used in organic light-emitting diodes (OLEDs). But achieving long-lived emission has been difficult, and the longest emission from organics under indoor lighting at room temperature was, until now, only a few minutes.

Researchers at Kyushu University's Center for Organic Photonics and Electronics Research (OPERA) have now broken through this limit using simple mixtures of two appropriate molecules. In films formed by melting together molecules that donate electrons and ones that accept electrons, emission lasting for over an hour was demonstrated for the first time from organic materials without the need for intense light sources or low temperatures.

"Many organic materials can use energy absorbed from light to emit light of a different color, but this emission is generally fast because the energy is stored directly on the molecule that produces the emission," says Ryota Kabe, lead author on the paper reporting these new findings.

"By contrast, our mixtures store the energy in electrical charges separated over a longer distance. This additional step allows us to greatly slow down the release of the energy as light, thereby achieving the glow-in-the-dark effect."

The extra electron on the acceptor can then hop to other acceptors and move away from the positively charged donor, resulting in separation of the charges. The separated charges gradually come back together--some slowly and some more quickly--and release their energy as light over the span of almost an hour.

The mixtures and processes are similar to what are found in organic solar cells and OLEDs. After building up separated charges like in a solar cell, the charges have nowhere to escape, so they eventually comeback together to emit light like an OLED. The key difference in the newly developed mixtures is that the charges can exist in a separated state for very long periods of times.

"With organics, we have a great opportunity to reduce the cost of glow-in-the-dark materials, so the first place we expect to see an impact is large-area applications, such as glowing corridors or roadways for added safety," says Chihaya Adachi, Director of OPERA.

"After that, we can start thinking about exploiting the versatility of organic materials to develop glow-in-the-dark fabrics and windows, or even bio-compatible probes for medical imaging."

The first challenge to tackle on the road to practical use is the sensitivity of the process to oxygen and water. Protective barriers are already used in organic electronics and inorganic glow-in-the-dark materials, so the researchers are confident that a solution can be found. Concurrently, they are also looking into new molecular structures to increase the emission duration and efficiency as well as to change the color.

With efforts to solve these remaining issues underway, a new wave of glow-in-the-dark materials based on organics look poised to invigorate the area and expand their applications.

This research was performed as a part of the Adachi Molecular Exciton Engineering Project funded by the Exploratory Research for Advanced Technology (ERATO) program of the Japan Science and Technology Agency (JST) under JST ERATO Grant Number JPMJER1305, Japan. 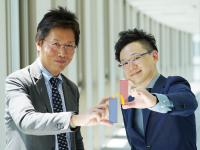