The idea of creating quantum computers has long captured the minds of researchers and experts of IT corporations. They are the most powerful computers operating according to the laws of the quantum world and capable of solving many problems more efficiently than the most productive classical supercomputers. Similar developments are underway, for example, at Google and IBM. However, many such projects require the use of cryostats. These are vessels with liquid nitrogen or compressed helium, inside which quantum processors are cooled to temperatures below -270°C. Such a low temperature is required to maintain the superconductivity effect, which is necessary for the operation of quantum computers.

The developments of Alexey Kavokin and his colleagues are related to the creation of a polariton platform for quantum computing. One of its key advantages is the ability to perform quantum computing at room temperature. The polariton laser has been discovered by Alexey Kavokin and his colleagues. It operates on the principle of Bose-Einstein condensation of exciton polaritons at room temperature, and makes possible the creation of qubits - the basic elements of quantum computers. Qubits occur using the method of laser irradiation of artificial semiconductor structures - microcavities.

In the new study, the researchers managed to observe experimentally for the first time how a Bose-Einstein condensate is formed in the world's thinnest semiconductor - the atomically thin crystal of molybdenum diselenide (MoSe2). Bosonic condensate contains tens of thousands of quanta of 'liquid light', the exact name of which is exciton polaritons. These particles have the properties of both light and ordinary material particles, and they can be used as information carriers. This means that, instead of electrons, an electrically neutral liquid light can run through the microcircuits of any electronic device. Polariton devices will make it possible to process immense data streams at speeds close to the speed of light.

'The Bose-Einstein condensate was obtained in a semiconductor microcavity containing a layer of a new crystalline material - an atomically thin crystal of MoSe2. The localisation of light in such a thin layer was achieved for the first time,' said Professor Alexey Kavokin about the discovery. 'This research can lead to the invention of new types of lasers based on two-dimensional crystals, allowing the creation of qubits - quantum transistors that are at the heart of a quantum computer operating on a liquid light.'

It is important to understand, as Alexey Kavokin has repeatedly noted, that quantum computers are now referred to as the atomic bomb of the 21st century. This is because they open up tremendous opportunities not only in the field of, for example, the creation of new drugs, but also in the field of cyberattacks. Having such a powerful computer, it is possible to crack almost any code. Consequently, scientists today are also facing an important challenge of protecting quantum devices - quantum cryptography. This is where the discoveries of Alexey Kavokin and his colleagues are also of great importance.

At present, Alexey Kavokin heads: the Spin Optics Laboratory of St Petersburg University; the Quantum Polaritonics group at the Russian Quantum Centre; and the International Centre for Polaritonics at the Westlake University in China. He is also a Professor at the University of Southampton (UK), where he serves as a Chair of Nanophysics and Photonics. In 2011, he won a mega-grant from the Government of the Russian Federation, as part of which the Uraltsev Spin Optics Laboratory was established. 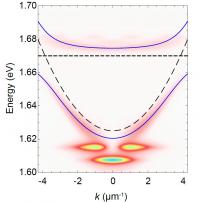