The skeleton of an extinct 'fish lizard' locked in a glass case over 16ft from the ground for the last 100 years has finally been studied, thanks to a selfie stick on a fishing rod.

The 145 million year old Nannopterygius is a species of ichthyosaur, which swam the seas of our planet for about 76 million years. It is on display in the Natural History Museum, London, but its glass cabinet is hung too high for easy examination.

Russian palaeontologist Nikolay Zverkov was desperate to see the London specimen as he thought some of the Russian ichthyosaurs might be similar.

It turns out he was right and that this particular species of swimming prehistoric reptile was common in its day, the Jurassic period.

To photograph and assess the skeleton, Nikolay attached a digital camera on a selfie stick to a fishing rod and connected it to a PC via a very long USB cable. He passed the photos on to University of Portsmouth palaeontologist Megan Jacobs who was working on Ichthyosaurs for her Master's Degree.

Megan and Nikolay have now published a paper on the findings in the Zoological Journal of the Linnean Society.

"Finally being able to study this enigmatic animal has shown that it was actually very common and widespread in the Late Jurassic occurring not only in England, but also in European Russia and in the Arctic."

Thanks to this new study, several more specimens of Nannopterygius have been found in museum collections across the UK - in Oxford, Cambridge and in the Etches Collection in Kimmeridge, Dorset, as well as in Russia and Norway, showing this animal to be much more common than previously thought, and making it one of the most widespread of any similar swimming reptile.

University of Portsmouth Professor of Palaeobiology, Dave Martill, a world leading expert who supervised Megan's research, said: "We previously only had detailed knowledge of a type of ichthyosaur called Ophthalmosaurus, which was known from hundreds of specimens, including well-preserved skeletons from the Middle Jurassic Oxford Clay Formation of England.

"The excellent data available for Ophthalmosaurus contrasted with the impoverished record of other Middle and Late Jurassic ichthyosaurs, so being able to access the Nannopterygius - a formerly inaccessible specimen - has given us fascinating new insight into a particular species of ichthyosaur we knew very little about."

Nikolay added: "For decades the scientific community thought that Nannopterygius was the rarest and most poorly known ichthyosaur of England. Finally we can say that we know nearly every skeletal detail of these small ichthyosaurs, and that these animals were widespread. The answer was very close - we just needed a fishing rod." 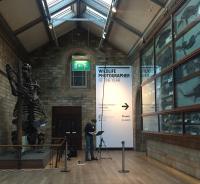