NASA's Aqua satellite and the GPM satellite passed over Cyclone Chapala as it was approaching landfall in central Yemen on November 2. The Global Precipitation Measurement Mission or GPM core satellite analyzed the heavy rain falling in the major hurricane.

On Nov. 2, 2015 at 09:40 UTC (4:40 p.m. EDT) the Moderate Resolution Imaging Spectroradiometer or MODIS instrument aboard NASA's Aqua satellite captured an image of Tropical Cyclone Chapala as the eye of the storm was approaching the Yemen coast. Chapala maintained an eye, although it appeared cloud-covered. Animated multispectral satellite imagery shows the system has maintained a 15-nautical-mile-wide eye and structure. The image was created by the MODIS Rapid Response Team at NASA's Goddard Space Flight Center, Greenbelt, Maryland.

Chapala weakened from category four intensity a couple days ago while maintaining a course that steers it toward Yemen.

On Nov. 2 at 0311 UTC (Nov. 1 at 10:11 p.m. EST) the GPM core satellite saw the heaviest rainfall on the western and southern quadrants of the storm, falling at more than 50 mm (1.90 inches) per hour. The most intense rainfall was occurring just southwest of the eye, where rain was falling up to 65 mm (2.5 inches) per hour. GPM is a satellite that is jointly managed by NASA and the Japan Aerospace Exploration Agency.

A couple of days before, the GPM core observatory satellite had another good look at tropical cyclone Chapala. On October 31, 2015 at 0331 UTC (Oct. 30 at 11:31 p.m. EDT) Chapala was a very powerful tropical cyclone with maximum sustained winds of about 117 knots (135 mph). GPM's Microwave Imager (GMI) instrument measured rain dropping at a rate of over 88 mm (3.5 inches) per hour northwest of Chapala's eye.

GPM's Dual-Frequency Precipitation Radar (DPR) swath of coverage passed to the east of Chapala's eye. Feeder bands on that side of the tropical cyclone were found by DPR to be dropping rain at a rate of about 44 mm (1.7 inches) per hour. A 3-D view was created at NASA Goddard looking toward the east. It was derived from GPM's Ka and Ku band radar data. It shows that storm tops on Chapala's eastern side were reaching heights of over 13.4 km (8.3 miles).

The Joint Typhoon Warning Center (JTWC) expects landfall to occur early on November 3, southwest of Mukalla. JTWC forecasters noted that dry air that is emanating from the Arabian Peninsula will continue to weaken the storm in addition to increasing vertical wind shear. The cyclone is expected to decay rapidly after landfall and dissipate by November 4. 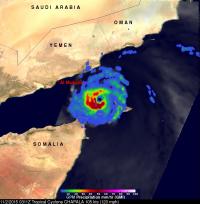 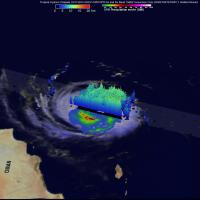